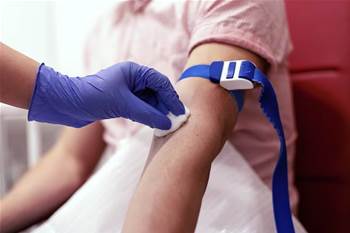 Let’s face it. Nobody really likes getting a needle stuck in their arm.

But for millions of public patients in the NSW health system, the waiting game of getting pathology results back and analysed by clinicians is now a whole lot shorter thanks to a mash up of point-of-care devices, 4G, cloud and IoT.

It’s a small but logical step away from using humans as a pin cushion.

Patients don’t like it. Nurses like it less. And when doctors can canulate, they’re commonly referred to by nurses on the floor as “a keeper” because their work doesn’t have to be reset.

Tapping a vein is a delicate art and one that should, under ideal circumstances, be used sparingly. Anyone who’s ever found, or watched a struggle to find an insertion point will attest to that.

The good news is the number of sharp pokes to get blood could be about to decrease.

Quick, reliable and accurate clinical data – especially observations like blood pressure, heart rate, oxygen saturation, temperature and blood counts – are the currency of coal face healthcare because they tell nurses and doctor’s what’s happening with a patient and what could happen.

For decades bloods have needed to be sent back to testing labs, incurring delays along the way and increasing the chance of manual errors or hiccups that can often require new tests being taken, especially if a window period is missed.

But that’s, and changing and it’s changing fast thanks to the adoption of so-called ‘point-of-care’ devices that can test blood by the bedside or at the location of a patient, whether that’s in the  home or at a location where ambulances or paramedics turn-up.

Patient observations that can be electronically shifted into patient care records have been around for a few years, not least as ‘obs carts’ – the wheeled pedestal-like machines that nurses drag around wards with them – got hooked up to Wi-Fi, batteries and a bunch of electronic sensors.

But the ability to push blood results, especially blood counts for the likes of red and white cells, immediately alongside other obs… and being on the spot ….  is biggy, because it can capture a basic real time clinical picture of key indicators that are used as signposts to diagnosis and care.

This video sets it out well, but at the end of the day it’s about reducing the physical wear and emotion on patients alike

Microsoft rushed out a press release on the project to celebrate the contribution of Azure to the real time business of blood just in time for the Australian visit of Microsoft’s CEO Satya Nardella.

There’s a bunch of cloud enabled stuff that will happen soon, supposedly after clinicians bow at the altar of software engineering. Ok, maybe not. Let’s just call it a grudging nod.

“It means patients could soon be tested in the back of an ambulance, on a football field or while undergoing surgery, and have their pathology results available to clinicians in real-time,” Mircrosoft said.

NSW Health was altogether more objective in its analysis.

So the bottom line is that as tests and data go real time, Microsoft’s local Azure instance, the ASD accredited one specifically designed for  thorny local use cases like health, can figure out patterns and what is being missed.

Which should be a hoot. When Microsoft come up with a funding applications AI and bot, well, that could be revolutionary.

In the meantime, roll up your sleeve and hope for the best.