NSW govt launches its own myGov 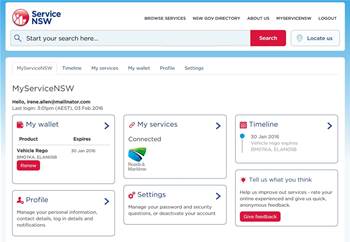 The NSW government has released its MyServiceNSW customer service portal to the public, offering citizens a one-stop online shop for interactions with government agencies.

NSW Finance Minister Dominic Perrottet first announced plans for the service - which is intended to offer the same "tell us once" functionality as the federal myGov portal - in July last year.

The Finance department quietly soft-launched the central account service late last year, and following user feedback and a subsequent revamp has now unleashed it to the public.

At the moment, only the Roads and Maritime Services and Office of State Revenue government agencies have signed up to the service.

Users can currently use the portal to access their license information, vehicle information, to pay and dispute fines, and check demerit points.

The department plans to update the digital profile service every few months with new functionality as further government agencies come on board.

“Our citizens should only have to ‘tell us once’, and that’s what we are aiming for with MyServiceNSW.”

MyServiceNSW accounts are accessible through the Service NSW website and mobile app, which was recently updated to make it easier for drivers to pay fines and access detailed information about their infringements.

NSW premier Mike Baird identified digital service delivery as one of his its 12 "premier's priorities" in September last year as part of a rewrite of the state's ten-year plan.

He wants to have 70 percent of government transactions conducted digitally by 2019, from a current standing of around 44 percent.