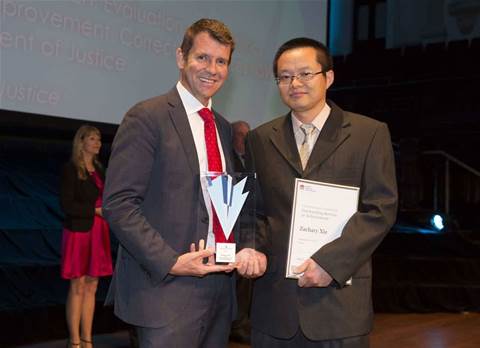 Zachary Xie receiving his award from the NSW Premier.

A pioneering data analytics project predicting the risk of re-offending amongst the state’s prison inmates has taken out the top individual gong at this year’s NSW Premier’s awards.

Zachary Xie told iTnews he was “surprised and honoured” to be named the Premier’s pick for individual excellence and achievement this year, an award he accepted on behalf of his team at Corrective Services NSW.

Run every year, the Premier’s awards shine a light on the best projects, policies and individuals in the NSW public sector.

The research analyst from CSNSW’s corrections research evaluation and statistics (CRES) team was recognised last week for his role leading the development of the agency’s criminal re-imprisonment estimate scale – a data based algorithm for estimating of the probability of prisoners re-offending.

The tool, built in an Oracle SQL database using the statistical package for the social sciences (SPSS), feeds in demographic and criminal history data that the agency already stores in its offender integrated management system, and crunches it using the CRES model to measure the risk profile of an individual.

To date, this information has been used by corrective services officers to piece together manual profiles, a process that can take up to eight weeks.

Xie’s new method will allow the re-offending risk of every new individual taken into NSW custody to be calculated automatically, saving Corrective Services time and money as well as outperforming the old method in terms of accuracy.

“[We can] optimise the allocation of resources in correctional centres by better identifying high risk offenders,” Xie said.

The model is the first of its kind in Australia, and is currently being tested across the agency. All recently sentenced inmates, who have yet to have their risk processed though the old manual method, will be profiled.

Xie, who has been with Corrective Services for nine years, said he saw great opportunities for the NSW public sector to better use its resources and improve service delivery by leveraging its increasing data stores.

“Due to technology and system development, there is more and more data recorded in computer systems, and we can make better use of this data,” he said.