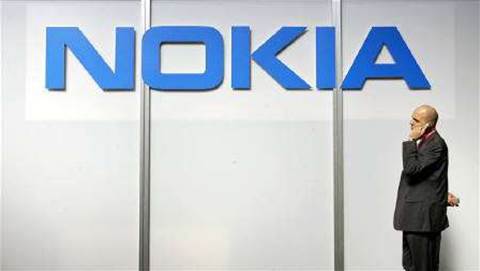 Nokia and Microsoft have teamed up to take on Google and Apple in the fast-growing smartphone market as the Finnish cellphone maker attempts to regain its leading position in the sector.

Nokia said it would use Windows Phone as the software platform for its smartphones as part of new chief executive Stephen Elop's overhaul of the world's biggest cellphone maker.

"Nokia and Microsoft will combine our strengths to deliver an ecosystem with unrivalled global reach and scale. It's now a three-horse race," Elop said ahead of an investor day in London.

Investors were not convinced by Elop's eagerly anticipated strategy announcement and shares in Nokia tumbled more than 11 percent as the market reacted to Nokia' saying that 2011 and 2012 would be "transition years" as it built up the partnership.

Friday's deal marks a major breakthrough for Microsoft after years of struggling to establish itself in wireless. Its Windows Phone had a mere 2 percent market share in the last quarter.

Microsoft's Windows Phone platform is widely recognised by industry experts as a leading edge technology but has not yet gained success among consumers.

"This is a partnership born out of both parties' fear of marginalisation at the hands of Apple and Google but there is no silver bullet," said analyst Geoff Blaber from CCS Insight.

Nokia has rapidly lost share in the higher-margin smartphone market to Apple's iPhone, and products based on Google's Android platform, which claimed the top spot from the company last quarter.

"This is a very frank admission that Nokia's platform strategy has failed and underlines the seriousness of Nokia's position. Such a move would have been unthinkable just 12 months ago," Blaber added.

In a bid to stem Nokia's losses, Chairman Jorma Ollila brought Elop in from Microsoft last September. The 47-year-old is the first non-Finn to head the company.

Nokia said in a statement it would stick with its current management team, with only one senior executive to leave. There had been speculation of a wider cull at the company.

Nokia also said it would use Microsoft's Bing search engine across its cellphones, potentially opening up a huge market for Microsoft as it seeks to build up its challenge to Google as the world's leading search engine.

Analysts said the Finnish company, which invested billions of dollars in building up mobile internet services under its previous CEO, had effectively admitted defeat in its services strategy by joining forces with Microsoft.