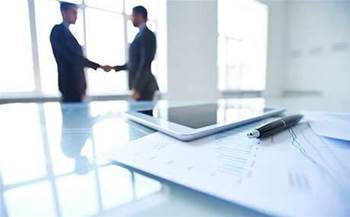 Nokia has confirmed plans to take over telecoms equipment company Alcatel Lucent in a €15.6 billion (A$21.8 billion) deal.

The pair yesterday revealed they were in talks around a merger, but at the time said discussions could still fall through.

The companies today announced they had signed a memorandum of understanding for an all-share transaction which values Alcatel at €15.6 billion.

Nokia said a takeover of Alcatel will allow it to reach its goal of becoming a major provider of networking equipment, able to compete with market leader Ericsson.

The pair expect the deal - which is subject to regulatory and shareholder approval - to close in the first half of next year. Both companies' boards have given their approval to the takeover.

"The combined company will be uniquely positioned to create the foundation of seamless connectivity for people and things wherever they are," Nokia said in a statement.

"This foundation is essential for enabling the next wave of technological change, including the Internet of Things and transition to the cloud.

"The combined company will be in a position to accelerate development of future technologies including 5G, IP and software-defined networking, cloud, analytics as well as sensors and imaging."

Once the transaction closes, Nokia will look to achieve a €900 million reduction in operating costs by 2019, plus a €200 million drop in interest expenses by 2017.

The reduction in operating costs would result in organisational streamlining, rationalisation of overlapping products and services, central functions, and regional and sales organisations, Nokia said.

It will also work to reduce overhead costs associated with real estate, manufacturing, supply chain, IT and administration.

Alcatel currently employs around 52,600 workers globally - predominantly in North America - 20,000 of which are focused on research and development.

Plans for the future

The joint body is set to be called Nokia Corporation and headquartered in Finland, with a strong French presence, Nokia said.

The company expects the combined entity will be able to access 50 percent more of the current addressable networks market - a potential jump from €84 billion to approximately €130 billion - than Nokia could alone.

Should the acquisition be successful, the entity's French presence will include a 5G/small cell R&D centre of excellence and a cyber security lab.

Nokia has also pledged to pour €100 million into a fund for French start-ups in the areas of IoT and the industrial internet.

In the US, Nokia expects the combination of Alcatel's Bell Labs and Nokia's FutureWorks to provide "unparalleled innovation capabilities".

"Our innovation capability will be extraordinary, bringing together the R&D engine of Nokia with that of Alcatel-Lucent and its iconic Bell Labs," Nokia CEO Rajeev Suri said in a statement.

"We have hugely complementary technologies and the comprehensive portfolio necessary to enable the internet of things and transition to the cloud.

"Together, we expect to have the scale to lead in every area in which we choose to compete, drive profitable growth, meet the needs of global customers, develop new technologies, build on our successful intellectual property licensing, and create value for our shareholders."

“A combination of Nokia and Alcatel-Lucent will offer a unique opportunity to create a European champion and global leader in ultra-broadband, IP networking and cloud applications," Alcatel CEO Michael Combes said in a statement.