NICTA's GiFi chip to reach the market next year 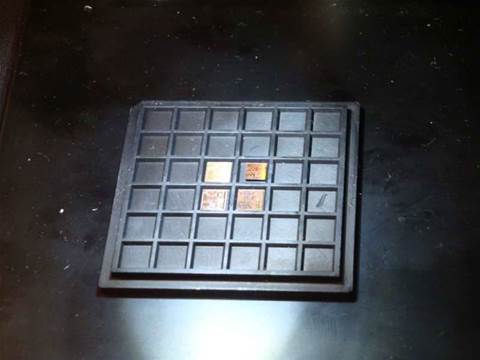 Establishes company in the US.

Confidential agreements between NICTA and major consumer hardware vendors could bring its gigabit wireless technology to market by next year.

In development since 2004, the 60GHz ‘GiFi’ chip promised to deliver tri-mode wireless connectivity at 10 times the speed of today’s 5GHz 802.11n technology.

A WirelessHD-compliant prototype was demonstrated in February 2009, and boasted audio and video transfer rates of 5Gbps.

The research team has since improved the technology’s robustness and compliance with the WiGig standard, researcher Jerry Liu told iTnews today.

NICTA hoped the technology would remove the need for cables for transferring large amounts of information between devices such as PCs, laptops and high-definition monitors.

GiFi was a hundred times faster than Bluetooth, NICTA claimed, and a single CMOS chip came at a tenth the cost of current technologies.

Nitero was headquartered in the US to target the larger market. Three staff members were located overseas, and 10 others worked on improving the technology from Australia.

Liu said GiFi chips would be on the market by 2012 through agreements with smartphone and tablet vendors.

The project was expected to have cost a total of $10 million, and involved IBM, Synopsys, Cadence, Anritsu, Agilent Technologies, Ansoft, Conventor and SUSS MicroTec.