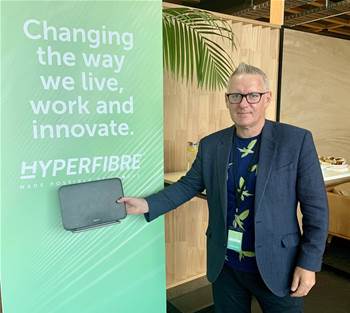 Ultrafast Broadband fibre to the premises customers in New Zealand will get the option to buy symmetric 2 and 4 gigabit per second service next year, with an 8 Gbps option to follow, as broadband wholesaler Chorus upgrades its network.

Chorus has trialled the XGS-PON, a 10 Gbps passive optical networking standard with a small set of customers this year, and will offer the product to retail service providers starting February next year.

The network builder claims this makes NZ one of only 10 countries in the world to offer XGS-PON service, and the first in the Southern Hemisphere.

Named HyperFibre, the service will launch in Queenstown and surrounding areas in February 2020, followed by the Wellington, Invercargill and Auckland metro areas between March and May.

By September, HyperFibre will be available for the general UFB phase 1 area customers.

Chorus was awarded the contract for 69 per cent of the UFB roll out area by the NZ government, after it was split off from incumbent Telecom (now renamed Spark) to allow it to participate in the nationwide FTTP project that will eventually reach 87 per cent of the population.

Kurt Rodgers, Chorus network strategy manager, said the service upgrade will be done over the past months by upgrading the lasers at both ends of the fibre connection.

Customers who need to transfer large amounts of data fast such as movie and video production houses are expected to be early adopters of HyperFibre products.

Chorus demonstrated the HyperFibre service at Augusto, and Auckland production house that had the 8 Gbps service installed as a trial.

On local connections, the latency for HyperFibre is around one millisecond.

While RSPs have yet to formulate plans and pricing for HyperFibre Rodgers said the faster service isn't expected to cost for example four times more for the 4 Gbps variant compared to the current 1 Gbps option.

Instead, Rodgers expects HyperFibre plans to carry only a modest premium over the NZ$75 to $99.95 gigabit per second options available currently.

Nokia supplies the customer premises equipment such as optical network terminals, as well as the gear in exchanges.

Recognising that many customers' on-premises networks can't keep up with full XGS-PON speeds, Rodgers said Chorus is launching with 2 and 4 Gbps initially.

The 8 Gbps service runs at 10 Gbps line speed, with the lower throughput figure due to protocol overhead, Rodgers explained.

"Obvious advocates will be those using high performance software applications that depend on real-time communication and high-resolution images, such as remote medical diagnostics and surgery, instantaneous software prototyping, as well as gaming and interactive entertainment services,” Ed Hyde, Chorus chief customer officer said.

Hyde said that popular games that scale to millions of players in very short periods of time and the launch of streaming video services such as Netflix and the upcoming Disney+ made it necessary for Chorus to add large amounts of capacity to its network to take into account sudden demand peaks.

Rodgers and Hyde said that due to how people use their internet connections now, Chorus keeps an eye on and works with the industry to cater for events such as the recent Rugby World Cup which was streamed by Spark from Japan.

Chorus is planning on additional upgrades at a later stage, including a 25 Gbps service that could be used for local data backhaul.

The faster fibre links could be used to connect 5G millimetre-wave access points if and when they become available, Rodgers said.

Edge computing and hyperscale clouds could also take advantage of HyperFibre, moving processing and storage infrastructure nearer to customers instead of currently being located mostly in Sydney.

Next year could see the first unbundled FTTP connections go for sale in New Zealand, if the industry and regulator Commerce Commission reaches agreement on wholesale pricing for fibre access.

Vocus and Vodafone have already teamed up for UFB unbundling and demonstrated a 10/5 Gbps fibre link in Auckland last February.

Last week, the former chief executive of Chorus, Kate McKenzie, was appointed to the NBN Co board by communications and finance ministers Paul Fletcher and Mathias Cormann.

McKenzie will take her seat on the NBN Co board on December 1 on her return to Australia from New Zealand.

On leaving Chorus, McKenzie said her one regret is that she would love to take the fantastic UFB fibre network back home to Australia with her, but conceded that that probably isn't going to happen.