Telstra and New Zealand telcos Telecom and Vodafone this morning announced that they are planning a joint cable project across the Tasman Sea.

The three have signed a non-binding memorandum of understanding to construct the Tasman Global Access (TGA) Cable which, if completed, will have a design capacity of 30 terabits per second.

Vodafone New Zealand chief executive Russell Stanners and his Telecom New Zealand counterpart Simon Moutter both called the business case for a new cable "compelling"; the amount of traffic from Australia to New Zealand for the two telcos is some 40 percent currently, and has steadily risen since the new millennium thanks to Sydney hosting an increasing number of data service companies. 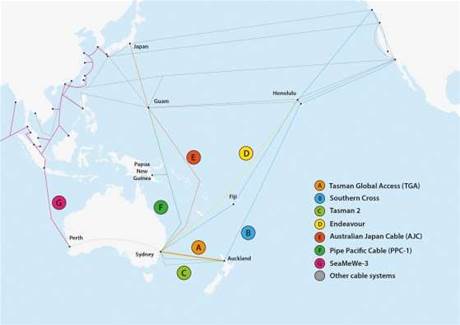 Stanners and Moutter also hope that the new cable will attract more data centre business to New Zealand, thanks to improved connectivity.

TGA has a likely completion date of mid to late next year and the cost is estimated at less than US$60 million. It will be laid between Auckland and Sydney.

Presently, the Southern Cross Cable system is the main circuit between Australia and New Zealand, supplemented by the older Tasman 2 circuit.

Southern Cross is majority owned by Telecom (50.1 percent), with Singtel/Optus (39.9 percent) and Verizon Business (10 percent) also having stakes in the system.

In August last year, the much-publicised Pacific Fibre cable venture which was to provide a second, large-capacity circuit between New Zealand and the United States folded after failing to obtain funding.