Nestlé puts its A/NZ digital masterplan on the table 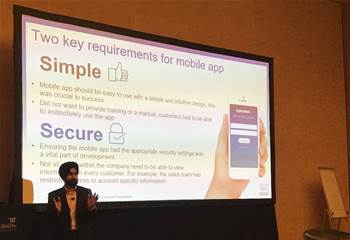 Nestlé is hoping to flush out more digital opportunities in its supply chain in Australia, New Zealand and the Pacific Islands as part of a “master plan” that is currently being implemented.

The fast-moving consumer goods (FMCG) producer has already set the foundations for a digital supply chain globally by connecting all its trading partners, suppliers and customers via a common B2B platform.

Before it existed, each region had its own B2B network; there were 30 worldwide, involving around 20 solution providers.

The OpenText-supplied interchange now processes orders from over 4000 customers in 80 markets that Nestlé operates, and acts a foundation for newer capabilities, including a mobile app that allows customers to check on their order status.

Nestlé said the mobile app can be used “from the shelf-edge” of a retail location, “avoiding the risk of going out-of-stock” on a product.

Customers can use to it time replenishment orders since it gives them a better idea of how long fulfilment will take.

“We’ve done a lot of work to be where we are today but it’s not game over; there’s a lot which is changing on a daily basis as far as technology is concerned,” Sodhi said.

“On our agenda or master plan … we are working through and having conversations internally to find business cases for how machine learning, IoT and blockchain can be best leveraged in our supply chain and our business both internally and externally.”

Sodhi said that some “pain points” had been identified in business units within the Oceania region.

“Although we’re under the Nestlé umbrella, we do have some unique requirements in terms of the suppliers, processes, factories and network we have,” he said.

“We’d like to break that out, have those discussions and work through implementing some of those advanced technologies.

“We’re talking to OpenText about some options in Australia where we need visibility across the sector”, he added, though he noted that was as part of a broader “industry effort”, not limited only to Nestlé.

Still, he saw opportunities for Nestlé to go in its own technology directions in Oceania.

“Within Nestlé, we’ve got this layer and network where we exchange ideas and talk about innovation and our partners like OpenText.”

Similarly, as in the case of the OpenText B2B Managed Services platform, there could be more opportunities for Nestlé to take digital systems trialled in other parts of its global operations and tailor them for use in Oceania, Sodhi indicated.

Sodhi did not mention specific use cases or opportunities for blockchain in Oceania.

But Nestlé just announced it is working with the French supermarket giant Carrefour on a food provenance application, using the IBM Food Trust blockchain platform. IBM Food Trust is also being piloted now in Australia, though not by Nestlé.

Sodhi said that the successful digitisation of Nestlé’s supply chain in Oceania and beyond would require input and cooperation from a lot of parties.

He said it was important to the company to have strong and efficient systems and processes internally, “but at the same time it’s about inter-organisational aspects as well - how we work as best as possible with our customers and suppliers.”

“It’s a blend of working together,” he said.

Sodhi believed there was appropriate incentives both within Nestle and its broader ecosystem to cooperate and to adopt newer technologies.

“It’s about understanding the end-to-end equation,” he said.