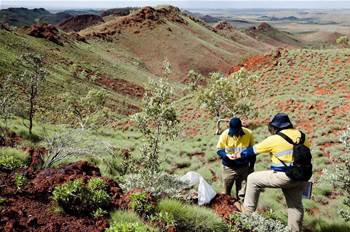 A group of research organisations have partnered with the National Computational Infrastructure (NCI) to create a big data platform that will unite the country's vast and disparate geoscience datasets.

The platform, led by not-for-profit AuScope with support of the CSIRO, has been funded by a $425,000 federal government injection alongside a $440,000 co-investment by the project's partners.

The aim is to improve earth monitoring that underpins civil, mining, agriculture and environmental management, as well as the detection, extraction and protection of energy, water and mineral resources.

Until now researchers would download geoscience data from a network of stores, each containing their own data descriptions and formats.

This meant researchers would spend up to 80 percent of their time cleaning and converting data before it could be used, NCI's Dr Lesley Wyborn said.

“Currently there is no way to readily discover relevant geoscience datasets from multiple locations in Australia,” Wyborn said in a statement.

“Making the data better organised, and having the software ready to process the online data will mean that researchers can focus much more on their scientific investigations and spend less time on finding and accessing the data and tools they require.”

The five-year project - dubbed the AuScope virtual research environment (AVRE) plan - will see the creation of a data-enhanced virtual laboratory (DeVL) accessed through a single portal that hosts "data, tools and compute resources".

The DeVL will build on several existing CSIRO-Geoscience Australia efforts, including the virtual geophysics laboratory and virtual core library.

The platform will be opened to organisations that haven't previously been involved with AuScope, the Australian National Data Service (ANDS), NECTAR, or Research Data Services (RDS).

"This leads to a more coherent and integrated geoscience e-research platform addressing a broader range of research sector and industry needs," NCI said.

AuScope CEO Dr Tim Rawling said the initiative would enable "a new capability for data discovery and computational analysis that underpins the next stage of innovation and scientific discovery".

“[Being] able to bring together datasets from all over Australia into a single integrated big data platform, and transform the data to be ready for new tools, software and analysis methods is a huge step forward," he said in a statement.