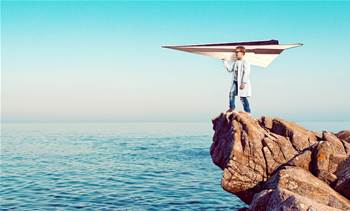 Aussie Broadband has revealed one of its residential NBN users managed to download 34TB of data in a month, setting a new high mark when it comes to published usage.

The number is 8TB higher than the last time a number like this was revealed; NBN Co said in December last year its biggest user at that time consumed 26TB in a month.

Responding to a question on “what is the most a user has downloaded in a month”, Aussie Broadband’s managing director Phillip Britt told a Reddit AMA that the “highest at the moment is 34TB.”

“They'll probably be hearing from us soon under the fair use policy,” Britt added.

iTnews has contacted an NBN Co spokesperson to see how 34TB in a month ranks across the entire NBN user base in terms of top consumers of internet services.

The sizable increase was made possible by the availability of higher speed NBN plans since NBN Co last revealed its own numbers.

It now offers relatively affordable 250Mbps and up to gigabit products to residential users, and has seen good take-up at the 250Mbps tier.

iTnews has confirmed the 34TB was consumed using one of these revamped high-speed connections.

COVID-19 may also have played a part, with residential connections now being used more for business purposes, or to simply stave off boredom during lockdowns.

Britt said that on a per-user basis, Queenslanders were the heaviest internet users, "followed closely by Victorians".