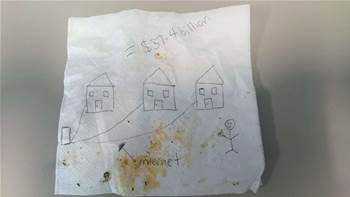 The pilot of former Prime Minister Kevin Rudd's ministerial jet has confirmed the existence of a long-rumoured napkin used to sketch out the first iteration of the national broadband network, today listing the used serviette for sale.

Rumours have long circulated that the first version of the $37.4 billion national broadband network was laid out by former Communications Minister Stephen Conroy to Rudd on the back of a table napkin during a prime ministerial flight in 2009.

Evidence for the tale has, until now, been thin on the ground.

But a new listing on global ecommerce site eBay - made without fanfare - reveals for the first time that the rumours were, in fact, true.

iTnews can confirm the legitimacy of the napkin, which has been kept for six years by a former pilot for Rudd's ministerial jet.

The pilot has requested to remain anonymous for privacy reasons.

He told iTnews he had quietly pocketed and kept the napkin as a nest egg for his retirement.

"I'm not a propeller-head but I had a feeling it would be valuable," he said.

The pilot retired from flying earlier this month and decided to list the napkin for sale on eBay today.

When questioned about the starting price of $5000, the pilot said he had taken cues from the closing prices of other iconic items.

"The Virgin Mary toasted cheese sandwich sold for US$28,000, and Kristina Keneally's kettle sold for $10, so I figured somewhere in the middle would be appropriate," he told iTnews.

The item went on sale today, April 1st, and the pilot hopes to have it sold before midday. 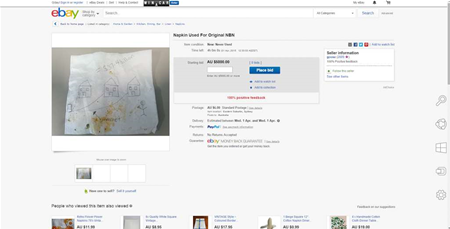