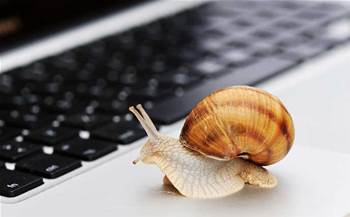 The class war is real.

NBN Co has finally confirmed that congestion on its network will “fluctuate” - or increase - when it removes a temporary price offer at the end of this month.

The admission, to be published in an NBN blog post later today, confirms that a situation first revealed by iTnews back in April this year will indeed become a reality.

In March this year, NBN Co claimed that users experienced on average just 12 minutes a week of slow internet on its network, down from a high of “almost five hours” a year ago.

However, that number has slowly risen since, and is now at a shade over one hour, based on the most recent set of numbers NBN Co has published (albeit that these are over a month old).

NBN Co will today say that "while there were record low levels of bandwidth congestion experienced on the network earlier this year, we do expect these levels to fluctuate as our promotional discount ends (31 October) and as we help service providers adopt our new wholesale discount bundles.”

This confirms that the improvement in congestion levels was largely the result of the temporary pricing unveiled by NBN Co at the end of last year.

Under the temporary price deal, known as Focus on 50, retail service providers received a cheap deal on the cost of a service (effectively a 50Mbps service at a 25Mbps price) and 50 percent extra connectivity virtual circuit (CVC) bandwidth for free, based on the amount they purchased.

Though this 50 percent CVC boost was ostensibly just for the upgraded 50Mbps users, in reality RSPs couldn’t limit it to just these customers.

As iTnews reported in April, when Focus on 50 is axed, a lot of users that received the shared benefit of that CVC boost will immediately lose it - unless their RSP pays the difference to NBN Co.

That would likely be a substantial cost for RSPs on an already low-margin product.

Before the CVC boost, RSPs had a spotty record when it came to provisioning CVC, leading to performance issues for end users, which NBN Co now admits are likely to resurface.

There is nothing stopping RSPs having customers on both old and new price constructs, but they would need to run the traffic over two separate CVC interconnects, substantially raising their costs.

NBN Co indicated it is expecting a last-minute rush from RSPs onto the permanent price construct.

“A dedicated team will be on standby to provide support should internet providers need it.

“We will also continue to monitor congestion levels and work with internet providers on how they can help improve the experience for Australians during the busy period (7pm to 11pm).”

However, NBN Co continued to offer little sympathy for RSPs - or customers, such as the sizable 12Mbps base - that are likely to now be saddled with congested services once more.

“NBN Co doesn’t set retail prices or products - this means it is up to internet providers to pick the most suitable pricing option and provision the amount of bandwidth they deem suitable for their customers,” NBN Co said.

“We know that both our standard and bundle products can deliver a great customer experience for Australians if internet providers purchase enough bandwidth on the NBN access network.”