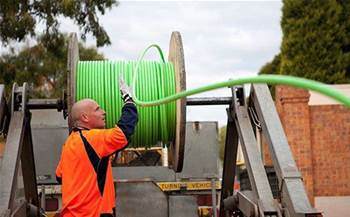 Over an initial two-year period.

NBN Co is hoping to use a proposed new pricing model to test how much more it can acceptably charge users for a 100Mbps service.

The company is proposing to introduce flat-rate wholesale prices on its 100Mbps tiers and above.

This would mean it does away with the unpopular connectivity virtual circuit (CVC) bandwidth charge on these tiers, but in doing so it removes a variable cost that brought in additional revenue.

To compensate for the loss of revenue, NBN Co has proposed to increase the cost of flat-priced plans once a year, using a new construct of “CPI plus three percent”.

With CPI at current levels, that could mean a 6.5 percent a year price rise - which at least one retailer believes is “not going to fly” and could result in repercussions at a government level.

NBN Co sought to clarify the CPI plus three percent concept at senate estimates, but in doing so revealed that it intends to use the mechanism to see just how much more users will pay for a broadband service.

“What we will do is test the market,” CEO Stephen Rue said.

“It’s [available to us on a] a ‘use it or lose it’ [basis], if you like, so to the extent that it’s not there and the retailers are not able to sell services based on that wholesale [price], we would adjust the prices.

“It really enables us to test what actually is the propensity to pay.”

Labor Senator Louise Pratt sought immediate clarification: “How much Australians are prepared to pay for these services?”

“That, senator, is what we will see,” Rue said.

Rue indicated that the use of the CPI plus three percent price rise is intended to be used only in the first two years of the new price model taking effect - if indeed it is even approved.

The flat-pricing model needs the support of the internet industry, but largely does not go as far as many players want in terms of wholesale changes to NBN Co’s pricing structure.

If not approved in its current form, NBN Co wouldn't get the opportunity to test price levels in the way it wants to.

Rue also said that the yearly price rise would only impact the “100 AVC” - suggesting it would apply only to 100Mbps services that are sold at a flat wholesale rate, and potentially not to higher speed tiers.