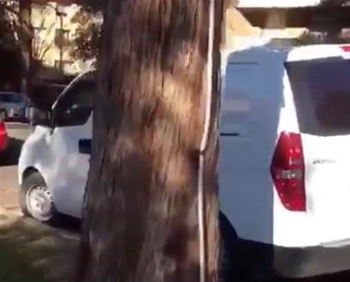 “Inherited in that condition” from Telstra.

NBN Co is set to conduct “rectification works” on a cable it inherited from Telstra that was found strung up between two trees in Sydney’s south.

A video posted to the Humans of Bankstown Facebook page showed a conduit attached to the trunks of trees, which was being used to run an aerial telecommunications cable between two points along the street. The video was first reported by ABC News.

NBN Co confirmed to iTnews that while it did not put the cable there, it would be responsible for fixing it.

“Cabling between two trees has been discovered while rolling out the NBN access network in the area of Hurstville,” an NBN Co spokesperson said.

“The cabling has been in place since or before July 2015, prior to the arrival of the NBN in the area, and was inherited in that condition from the previous network provider.”

Telstra is the prior owner of the cabling.

A Telstra spokesperson said it appeared "to have been a temporary fix that has not been followed up and completed properly."

“Our focus at the time was on keeping our customers connected, unfortunately in this case we should have gone back and completed the repairs,” the spokesperson said. said.

Hurstville is located in the hybrid fibre coaxial (HFC) footprint. Parts of the suburb had Telstra or Optus HFC, or both.

“When we take on existing infrastructure, we undertake repairs if and when we need to,” NBN Co’s spokesperson said.

“As there was no impact to service quality of the cabling, the non-compliant network set up was not picked up in the design or network testing process.

“Technicians have attended the site to examine the construction in order to arrange rectification works.”