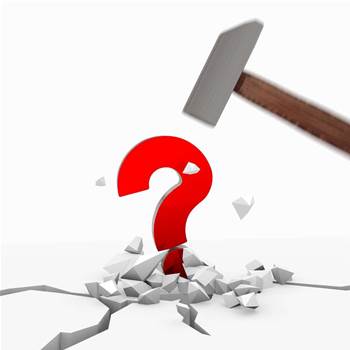 NBN Co is smashing uncertainty over its June targets.
Page 2 of 3  |  Single page

NBN Co's targets are in "premises passed", but the company does not report those numbers on a rolling basis.

It instead provides monthly, publicly-accessible updates when premises are expected to be declared "Ready For Service".

NBN Co's definitions say that if premises are "Ready For Service", they are considered to have been "passed".

On that basis, armed with the latest iteration of NBN Co's Ready For Service spreadsheet, it is possible to calculate expectations for premises passed this quarter.

The latest iteration of the Ready For Service spreadsheet is the first to put actual dates on every fibre distribution area (FDA) that the company has under construction in 'early access' rollout areas.

Previously, most FDAs — which contain up to 200 premises — were simply dated "expected to complete prior to 1 July 2013". Month-to-month, there was no indication of how construction in these areas was tracking.

All 'early access' FDAs are now to be Ready For Service either in May or June.

The April figure is 'best-effort' based on FDAs that met April service deadlines. Our retrospective analysis shows many didn't, and simply rolled into the May or June numbers.

It would be possible to cross-check how conservative (or not) the April figure is by consulting NBN Co's historical footprint spreadsheet, however this is not a publicly-accessible resource.

The next challenge is working out, from publicly-available figures, the contribution of non 'early access' fibre serving area modules (FSAMs) and FDAs to the June targets.

Our analysis found only one possible FSAM — 4APL-04, which is sized at 2400 premises. It is listed to be Ready For Service on June 1. iTnews confirmed with an NBN Co spokesperson that the date signified it would be 100 percent complete.

It's quite possible there are more that are not on publicly-listed databases.

There's also an accounting anomaly to contend with. NBN Co has been vying to convert 82 non-'early access' FSAMs to 'early access' status. This happened quietly on May 15.

The change shouldn't be captured in the May Ready For Service plan (given it runs to April 30), but it is. Our analysis shows FDAs in 30 of the 82 newly-minted 'early access' FSAMs are already listed in the 'early access - brownfields' tab of the spreadsheet. An NBN Co spokeswoman confirmed they've been listed in there for months, pre-dating regulatory approval of the status conversion.

On that basis, the total brownfields contribution we can calculate is 109,351 premises passed between April 1 and June 30.

For 'early access' sites, NBN Co publishes the number of premises it expects each rollout area — called a fibre serving area module (FSAM) — to cover, and the (usually 16) FDAs that make up that FSAM count.

One should be able to crosscheck the total FSAM number by adding together the size of all FDAs in that FSAM i.e. the sum of its parts.

For FSAMs due for completion up to June 31, this produces some variations. For example:

In other words, the sum of the publicly-listed parts of some FSAMs is quite a bit less than the expected whole.

There's a few reasons why some FSAMs seem to be down a few FDAs. The most obvious is those FDAs were completed prior to the FSAMs being declared 'early access'. As such, their rollout progress would have been invisible from earlier spreadsheets.

Whatever the reason, these premises are still in the rollout but aren't captured by our calculations up to this point.

We identified one other variable in calculating NBN Co's premises-passed progress: where the 68,200 baseline for the March quarter comes from.

The danger of using it outright is that it might contain some overlap with our own calculations.

A complicated data matching exercise using seven spreadsheets allowed us to reverse-engineer almost the whole figure and exclude a portion we could not explain (and therefore that could be susceptible to double-accounting).

About 45,730 premises passed to date are likely to be from 24 completed FSAMs that NBN Co released details for in late April.

Without access to the historical footprint, determining the remainder of the number was tricky, but possible. We found 16,755 premises by correlating changes in the different datasets.

This is enough to calculate roughly whether or not NBN Co is on track to meet or beat its June rollout target in brownfields.

At the bottom end of the range, we used (iTnews baseline + April-June quarter), which comes to 171,836 premises passed by the end of June.

The absolute upper end of our range includes the FSAM shortfall figure. It's a bit of an unknown exactly how to account for this: potentially, some of the 13,972 premises caught in our shortfall calculation are among the 5715 premises we couldn't vet in NBN Co's March quarter figure. We don't know.

Regardless, it gives a top-end estimate of 185,808 premises passed by the end of June.

In a best case scenario, NBN Co could exceed the revised June target range by up to 13,000 premises passed.

Obviously these numbers are based on NBN Co's Ready for Service expectations, rather than actual achievements.

But if NBN Co can stay the course over the next five weeks, the turnaround will be a major credit to the company and its contractors.

Read on for the greenfields recovery.