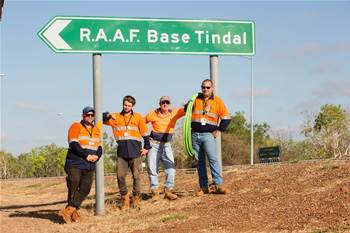 NBN Co has struck a deal with Defence to connect 400 “non-operational” Air Force, Army and Navy “on-base structures and facilities” to its network.

The sites are currently served with DSL and PSTN. NBN Co said the NBN connections would be made using a mix of access technologies.

The Defence connections are understood to have not been previously covered by the NBN rollout.

This necessitated a separate agreement to be struck between NBN Co and Defence, though it was unclear which party had sought out the deal, nor whether the work had been tendered for.

Spokespeople for NBN Co and Defence have been contacted for comment.

Work under the agreement began last month and to date has been concentrated at “two priority sites in the NT: at Royal Australian Air Force (RAAF) Base Tindal and Larrakeyah Barracks, incorporating HMAS Coonawarra".

“Once these sites are complete approximately 20 more sites are to be built before the end of the year,” NBN Co said.

Aside from use by Defence personnel, NBN Co said its services could also be used by “on-base commercial assets such as cafeterias and shops, which will see the benefits of fast connectivity for conducting business".