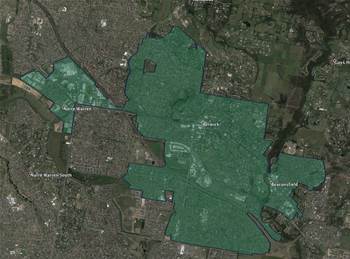 NBN Co has now provided high-level boundary maps for the first 130 of a planned 240 business fibre zones across the country.

The maps, which are individual PDFs, have been attached over the list of place names on an earlier media statement announcing the zones.

NBN Co describes the maps as “indicative” - it’s not possible to see the boundaries with street-level accuracy, though residents or businesses familiar with their geographic areas will be able to draw some sort of inferences on whether or not they fall within one of the zones.

The network builder unveiled an up to $700 million plan Tuesday to create 240 “business fibre zones” across Australia where every business in the area can get a free fibre connection at “CBD zone wholesale pricing”.

The rezoning means access to business fibre and pricing is now easier to understand for prospective business customers.

As it currently stands, NBN Co zones business premises as either A, B or C, and this impacts their ability - as well as their cost - to have fibre deployed.

As iTnews has previously reported, NBN Co uses a ‘black box’ algorithm to determine if a business or collection of business sites qualify for free or deferred cost fibre.

No one outside of NBN Co really understands the mechanics of how the algorithm reaches its conclusions, creating uncertainty for retail service providers as they try to sign businesses up to NBN deals.

The zoning changes were welcomed by retail service providers (RSPs) that target the business sector, such as Aussie Broadband.

“We’re very pleased with NBN Co’s improvements to enterprise ethernet. In particular, it is great to see that NBN Co has responded to our feedback and removed the zone pricing in many areas across Australia, which will enable thousands more businesses to take advantage of the NBN fibre network,” Aussie Broadband’s general manager of marketing and corporate strategy Matthew Kusi-Appauh said in a statement.

“We look forward to working closely with NBN Co to further improve their business products in future, in particular expanding the footprint of CBD zone prices nationally.”