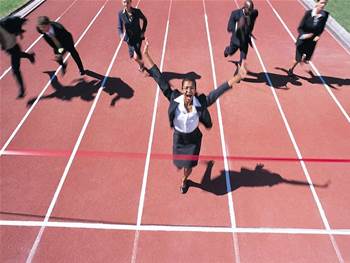 "Debunks" other league tables, creates its own.

NBN Co will launch its own broadband speed ranking system - while “debunking” existing ones - in Amsterdam next week, escalating a long-running beef over third-party rankings that place Australia’s internet speeds alongside those of developing countries.

The company is understood to have commissioned local advisory firm AlphaBeta to produce the ‘global broadband speed report’, which it will launch at Broadband World Forum on Wednesday.

The report “debunks popular speed test rankings with unrepresentative samples that produce unreliable and unrealistic results, and offers an alternate methodology that ranks countries based on the average broadband speeds available to all citizens – a key factor in delivering social and economic benefits,” according to a blurb sighted by iTnews.

An NBN Co spokesperson declined to comment ahead of the announcement.

NBN Co’s CEO Stephen Rue and CTO Ray Owen will both be at the conference in the Netherlands.

In addition to launching the report, Rue is expected to present on what NBN means “to society” and how its value should be quantified.

The fact that NBN Co is set to create its own separate broadband speed rankings is not surprising in the sense that the company has been dogged by Australia’s results in existing rankings for some time.

NBN Co sought to debunk numbers from Akamai’s regular state of the internet report back in October 2017, after a widely-circulated Bloomberg story alleged Kenya had faster internet than Australia.

The Kenya story was mostly debunked independently. But reports using other speed test rankings - such as by Ookla - have persisted, with Australia’s average download speeds regularly ranking poorly, and NBN Co copping much of the blame for it.

It’s not the first time that NBN Co has commissioned AlphaBeta to produce research that might help the network builder reframe a difficult conversation.

Earlier this year, NBN Co engaged AlphaBeta for a report that found “Australia’s broadband affordability to be among the best in the world”.

That finding isn’t supported by even the government’s own research on broadband affordability - and NBN affordability remains an unresolved issue.

It will be enlightening to see how NBN Co rates in its own country-by-country speed bake-off.

NBN Co is a repeat visitor to Broadband World Forum.

Its most infamous appearance was back in 2016, when it revealed plans to create an internet of things (IoT) business, at a time when the residential rollout was far less progressed.

This was one of the first public occasions that NBN Co suggested it could launch into markets outside of its stated remit; that has now happened several times, such as with its move into airplane connectivity, and the enterprise and government market.