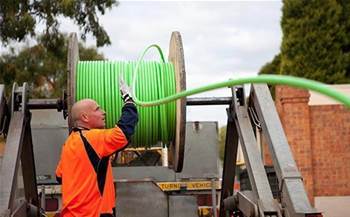 NBN Co has conceded - before its network is even complete - that some businesses, schools and hospitals outside the fixed-line footprint already require network upgrades to meet "emerging" needs.

In a damning assessment of the “least cost to the taxpayer” model it has been forced by the Coalition government to use, NBN Co said it already has a list of premises it wants to move out of fixed wireless or satellite and into fixed-line - but no spare cash to do so.

It is pitching for $53 million in federal grants soon to be on offer through a regional connectivity program, and matched (or greater) co-contributions from other tiers of government, to follow through.

“NBN Co has already nominated a technology for every premises in Australia covered by the NBN access network based on the least cost to taxpayers,” it said in a document published late last week. [pdf]

“However, NBN Co also acknowledges that some business premises and locations such as schools and hospitals in the non-fixed line footprint could benefit from a fixed-line connection to meet emerging community development, social, health or educational needs.

“NBN Co is keen to participate in ... projects where additional investment could facilitate faster upgrades, specifically deepening fixed-line penetration, for selected areas where practicably feasible, and with regard to NBN Co’s fiscal obligations.

“NBN Co has already identified some high-potential areas, some of which are in regional and remote Australia, and would be willing to work with local, state and territory governments or other interested financial contributors to develop and mobilise these projects.”

The timing of the admission that commercial and community facilities outside the fixed-line footprint should be fast-tracked onto a fixed-line connection - before the NBN is even completed - raises fresh questions around how decisions have been made to date with regard to access technology allocations.

The government initially said infrastructure investments made under the forthcoming $53 million regional connectivity program would “complement” the NBN “in some areas with bespoke, place-based solutions.”

NBN Co, however, sees the program as a source of funding to directly upgrade facilities or areas in its own footprint that have already outgrown a fixed wireless or satellite connection.

“An example of such a project could be extending fixed-line services to business parks that are currently served by NBN fixed wireless or NBN Sky Muster satellite due to their distance from regional centres,” NBN Co said.

“An indication from business park residents of willingness to take-up services, assistance from local government in regard to planning approvals or access to existing infrastructure, and an assessment of avoided costs are factors NBN Co could consider taking into account.”

These areas can already pursue a fixed-line upgrade through a mechanism called an "area switch"; however, applicants need to fund 100 percent of the upgrade themselves, and only a tiny percentage have been able to afford to.

The 2018 Regional Telecommunications Review suggested NBN Co should be paying part of the area switch cost.

The regional connectivity program - which was part of the government's response to the review - could allow more area switches to occur, without requiring NBN Co to tip its own money in.

NBN Co indicated it is open to a number of potential models to fund future upgrades in regional and remote Australia.

This appears to include models that mimic its enterprise and government (E&G) play, where it offers to deploy fixed-line upgrades in exchange for future revenue and usage guarantees.

“NBN Co is open to discussions that take into account, for example, future revenue to offset construction costs (particularly committed revenue from demand aggregation programs), potential avoided costs that may have been incurred in the absence of particular projects, and also proposals from third parties that would reduce construction costs,” it said.

Demand aggregation, it said, could be coordinated by the federal government. This would involve groups or communities making “a form of commitment to taking up a service once the infrastructure is in place.”

“This would provide [NBN Co] some certainty around revenue and assist in establishing a business case in these areas,” it suggested.

“At one end of the spectrum, a demand aggregation program could seek a non-binding indication of interest from communities and at the other end it could be a commitment to a certain monthly spend over a specified length of time.”

However, NBN Co will also need to tread carefully if it goes down this path, as upgrade decisions made solely on the basis of the future revenue could create even deeper divisions in the speeds and technologies available to users in regional and remote Australia.

Already, NBN Co has faced criticism over where it draws the line in regional communities between who gets fixed-line and wireless or satellite, since the different access technologies come with vastly different user experiences and costs.

The federal government is now consulting with industry on draft guidelines for the regional connectivity program, ahead of opening it up for applications.

Paying for a future

NBN Co's reflections on how it might fund future upgrades to the fixed wireless and satellite networks come as the senate considers this very issue as it determines whether or not to pass the regional broadband scheme (RBS), aka the 'broadband tax'.

The network builder is refusing to release even rough numbers on how these parts of the network perform from a profit and loss (P&L) standpoint.

Senators weighing up whether to let the broadband tax pass are trying to work out to what extent the revenue it generates can improve the economics of operating these networks.

If the tax offset little of the future expense of maintaining and upgrading fixed wireless and satellite, there could be a strong argument not to pass it.

It has long been suspected that upgrades would need to be funded from another future call on the budget - something the current government is keen to avoid.

If, through the regional connectivity program, NBN Co is able to meet a high percentage of its future costs via a combination of user-pays, state and territory and local government grants and commercial contributions, it may be able to further reduce its reliance on - and need for - the broadband tax to pay for future upgrades.