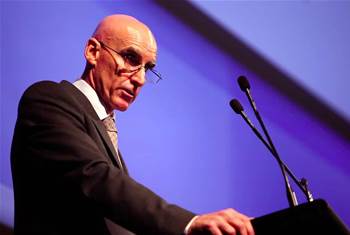 NBN Co chief Mike Quigley has today promised the Government-owned telco has no intention of offering volume discounts to Telstra or any other service provider connected to the national broadband network.

Several service providers had raised concerns over the potential for NBN Co to grant volume discounts to large players in return for an "efficiency gain".

That possibility had been struck out of the NBN bills in the Senate last week.

Quigley said today that NBN Co "never had any intention to offer volume discounts" to anyone.

"I know there was that debate but where do you draw the line in that, frankly," he said. "It's important that we have very transparent, simple and open rules, and one of those is on volume discounts.

"If we broke it, then the industry has to figure out exactly where it stops. [That's why] we have one price [for everyone]."

Quigley also assured attendees of the summit that no part of its ongoing negotiations with Telstra involved a deal on volume discounts.

He said that any condition that was possible would be "enjoyed by all" access seekers, not just a select few.

Quigley spent much of his brief appearance at the summit providing an update on the network construction effort as the company prepared to make its first mainland connections in Armidale by the end of next month.

He also said he was yet to review a raft of last-minute amendments to NBN legislation which has now passed both houses of parliament.

Quigley noted it was "really up to the Government to put policy settings in place" for the network.

Telstra chief David Thodey also briefly touched on the amended bills, saying only they appeared to be "generally within the spirit of what was originally said."

The telco had previously raised concerns about the potential for "vertical integration" of NBN Co.

Thodey said today only that Telstra's opinions on the bills were already "on the record" in the form of its submissions to the process.