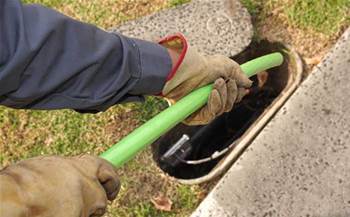 Ability to meet revenue goals is on the line.

NBN Co is relying heavily on the business sector being the biggest driver in average revenue per user (ARPU) in order for it to meet its revenue goals for 2020.

The network builder needs to increase its ARPU to $52 in order to generate the $5 billion in revenue it is targeting for FY2020 under its corporate plan.

But ARPU has sat steady at around $43 for the past several years, and in the network builder's latest quarterly results released today, showed no immediate signs of budging.

NBN Co is hoping that a dedicated campaign to get business users onto the network - alongside an expected increase in IoT devices and data consumption for consumer users - will boost it to its target.

The network builder has previously said more NBN consumers will need to take up higher-speed plans - above the popular 25/5 speed tier - in order for it to reach its revenue goal.

It has attributed the current popularity of the two lowest speed tiers - the leading 25/5 and second place 12/1 - to lack of awareness of what speeds mean for usage, and limited current need for the higher tier offerings.

The company is trying to remove some of the confusion for consumer customers through a new marketing campaign that sells the speed tiers as “nbn 25”, “nbn50” and “nbn100”.

The vast majority of users in the current NBN fixed-line footprint are on 25/5 plans, followed closely by the 12/1 tier.

The 25/5 speed tier is also the vastly more popular choice for fixed wireless users and satellite users, but fell to 78 percent from 83 percent in fixed wireless, and from 74 percent to 66 percent on satellite, compared to the same period in FY16.

NBN Co CEO Bill Morrow today said he expected growth in the higher speed tiers over the next few years as IoT adoption explodes and more businesses are lured onto the NBN.

That would result in retail service providers buying more CVC and therefore providing a revenue lift to NBN Co's ARPU.

But more pressing is the need to get business customers onto the network.

It is in the early stages of an aggressive campaign to entice high-value business users off Telstra's network through a suite of business Ethernet offerings, and has built up an internal team to target the business market.

"ARPU is exactly as we expect at the moment," chief customer officer John Simon said during a results call this morning.

"In the future we will see business revenue coming through, and higher ARPU. Speed tiers and data consumption will grow in terms of consumer willingness to pay."

Simon said he expected to see an uptick in ARPU over the next 12-18 months.

Morrow said the network builder was in the process of updating its corporate plan, with an anticipated August release, which would detail more about its plans to increase ARPU.

"The ARPU lift is driven by two factors. One is just the natural evolution as we see more and more applications demanding more data throughput and higher speeds ... but the biggest driver will be the business segment," he said.

The network builder said it is on track to meet the milestones set for the halfway point of the rollout in June, having boosted its weekly run rate to 58,000 premises compared to 26,000 at the same time last year.

It currently has more than 2 million premises with active services, and just over 4.6 million connected premises.

Most are on the FTTN network. The FTTP footprint still containts the largest number of activated users at more than 1 million, but the number of end users on FTTN is quickly scaling and reached 676,233 at the end of the last quarter compared to 43,533 at the same period of FY16.

The fixed wireless footprint also grew significantly, sitting at 170,482 at the end of March compared to 99,455 a year ago.

Most of the revenue is still coming from FTTP, which made up $269 million of the total revenue figure.

However, revenue from CVC charges is growing despite a recent drop in the fees, up from $85 million in Q3 FY16 to $199 million in the past quarter. Revenue from FTTN has grown from $3 million a year ago to $98 million, while HFC booked $3 million in revenue; services had not been available a year ago.

NBN Co is also about to run out of the federal government's equity funding.

It revealed the $29.5 billion will be spent by September, at which point the government's $19.5 billion in loan funding will kick in to enable it to complete the project.