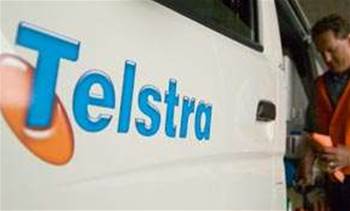 Scales up with rollout.

NBN Co has more than quadrupled its financial liability to Telstra to $896 million in just eight months as it attempts to rapidly scale up fibre network construction efforts.

The sizeable increase appears to be a primary contributor to the growth of NBN Co's total liabilities, which clocked in at $3.4 billion at the end of February this year.

Risk statements released with the federal budget for 2013-14 show NBN Co's burgeoning liability to Telstra under 2011's definitive agreements, which — among other things — cover payments to access pit-and-pipe infrastructure and to migrate copper users onto NBN fibre.

The rapid growth in Telstra-related expenses coincides with NBN Co's attempts to ramp up network construction, particularly in the run-up to the federal election in September this year.

NBN Co is behind schedule on meeting some of its rollout targets but expects to recover relatively quickly.

A report by the Australian Financial Review in April noted that Telstra is "handing over parts of its infrastructure more quickly" than envisaged under the definitive agreements, as NBN Co pushes to speed up its rollout.

NBN Co's liability to Telstra is likely to be the more important risk figure from the budget papers in the wake of the Coalition's broadband policy released last month.

The Coalition's plan is predicated on renegotiating the agreements with Telstra.

Previously, attention was given to the total financial liability that NBN Co had run up, which taxpayers would thus be liable for if the Coalition had decided to can the NBN, as had once been its policy position.

Removing the $686 million increase in Telstra liabilities over the period, NBN Co became liable for another $414 million in other expenses.

The company signed a slew of construction contracts between June 2012 and February 2013, which likely account for that liability. They include $90 million for Visionstream, $94 million for Downer EDI and $87 million for rollout to multi-dwelling units.

Contracts signed since the end of February 2013 point to a further scaling up of NBN Co's liabilities since the Budget figures were prepared.

They include a $334 deal with Visionstream and a reported $300 million satellite launch contract.

The Government used the 2013-14 Budget to back calls by the Sinclair Review to bolster two existing digital inclusion programs in regional Australia.

Both aim to get individuals and businesses taking advantage of NBN services in their local area.

It had previously reserved action on bolstering the programs when it released an official response to the Review last year.