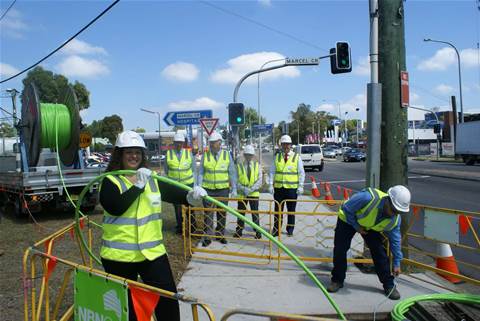 It is the first time NBN Co has rolled out its own fibre optic cable in Western Sydney. The local distribution fibre was hauled on the corner of Main Street and Marcel Crescent.

Select homes and businesses in Blacktown are expected to be connected to the NBN by mid-2013.

“Today’s fibre haul here in Blacktown marks an important step in the rollout of the NBN to not only Western Sydney but Sydney as a whole,” NBN Co spokesperson Darren Rudd said in a statement.

Rudd said that some areas of construction in Blacktown would be completed by July 2013, with homes and businesses connected shortly thereafter.

The rollout in Blacktown is in six modules, each covering around 3000 homes. 19,900 Blacktown properties are expected to be connected in the next three years.

"We actually have some northern suburbs that can't get high speed broadband at even a basic level﻿, ﻿﻿so there's really been a strong demand from residents," Rowland told iTnews.

"The infrastructure deficits that communities in Western Sydney suffer from are really exacerbated; we seem to be the last to get anything. So I'm really excited that we're actually the first this time around. "

Construction is also currently underway in the neighbouring suburb of Seven Hills and Penrith.

By mid-2015, NBN Co estimates it will have commenced or completed fibre network construction for 216,800 homes and businesses in Western Sydney.

Sydneysiders can check out when their street is slated to receive the NBN by paying a visit to the NBN rollout map.

A list of Sydney suburbs on the NBN rollout schedule can also be viewed here.