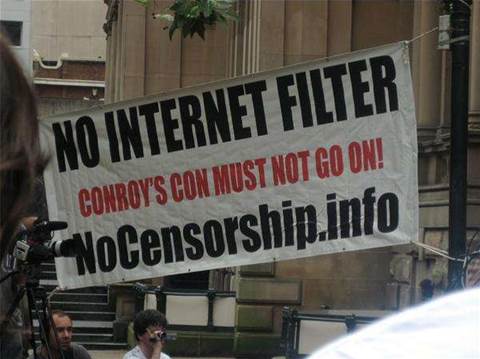 Australia Day BBQs to go ahead.

A planned national protest against the Federal Government's internet censorship regime was pushed back to March but separate Australia Day protests were on track.

Organisers of the Block the Filter campaign last night updated their Facebook page to say that nationwide protests on January 30 will take place on March 6.

"As you can see, the date has changed - this is because many permits were impossible to get during the holiday season, and a few states lack the volunteers to hold a protest during January," a statement said.

"This is still the case, so we are actively seeking representatives from each state/territory to plan the protest in their area."

More than 8900 people were listed as "maybe attending" the protest.

The last major protest against the filter was in December, 2008.

But at least two other grassroots gatherings are on track.

Electronic Frontiers Australia's Internet Blackout planned a "nationwide demonstration" on Australia Day in the form of state-based parties or BBQs to "celebrate the freedoms Australians enjoy".

The emphasis was on a positive gathering rather than a protest, said spokesman Colin Jacobs: "We're not organising any protests at the moment".

"As we speak we're in the process of figuring out what shape the [Australia Day] events will take."

Further announcements were expected "in the coming days. "We've just put somebody on to run the campaign," Jacobs said.

At least one state has confirmed its participation with Queensland's Stop Internet Censorship group announcing a "casual BBQ" at Orleigh Park in the inner Brisbane suburb of West End.

The group was also planning its own campaign rally for mid-February. A spokesman said the rally was about furnishing supporters with "plans and ideas... to go out and hold suburban discussion meetings with the people who don't already agree with us.

"What's crucial is taking the anti-censorship campaign beyond our own supporters, and talking to ordinary people and convincing them that they should be against Internet censorship," the spokesman said.

Jacobs believed the existence of multiple anti-filtering campaigns highlighted that a "lot of people are really mad about [the plan] and want to do something" about it.

"It shows the outpouring of energy and resentment in the community that there should be," he said.

Jacobs also said the EFA was still "drumming up support" for another component of the Internet Blackout campaign, which will place a black overlay over participating web pages.

"We're optimistic it will have some impact," Jacobs said.

"The challenge always is reaching those who are not internet savvy."