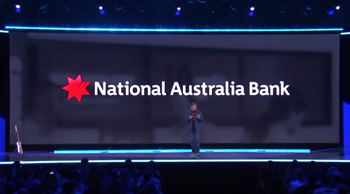 They left when infrastructure was outsourced a decade ago.

NAB has been forced to lean heavily on AWS managed services for its highly-publicised shift into public cloud after a decade of IT outsourcing left it with “no technical staff”.

The reliance on Amazon Managed Services (AMS) was disclosed by several bank IT executives at last week’s AWS re:Invent 2018 show in Las Vegas.

With AWS creating the standard templates for NAB’s public cloud adoption and supplying staff to manage those platforms, it explains AWS’ grip on the NAB account, and the mountain that others - like Microsoft - must climb to break into the sizable project.

That job likely became even harder with NAB unveiling AWS as “its long term strategic cloud provider” in a media statement that coincided with NAB’s appearance on-stage during a re:Invent keynote.

NAB said last month that it hopes to re-home 35 percent of its IT application portfolio in the cloud within the next three to five years.

It now has “100-plus” applications sitting on AWS - including 30 that it transitioned in 50 days, using an abbreviated version of an AWS program called 50 in 50.

In NAB’s many presentations during 2018 on achieving scale in its cloud journey, it has not been entirely clear how much resource the bank has been throwing at the project.

The bank has repeatedly talked up its cloud guild, a training program designed to upskill its staff in AWS (as well as some other cloud technologies).

About 350 staff so far have achieved 500 AWS certifications - in other words, some have more than one cert to their name.

While this is visibly increasing the number of applications being either reworked or coded to run natively on AWS, the bulk of the AWS setup and environment maintenance is outsourced.

NAB’s executive general manager of infrastructure, cloud and workplace, Steve Day, presented two versions of the same session at re:Invent which - together - provide a composite view of the bank’s reliance on AWS staff to get where it is today.

Day said that a decade of IT outsourcing had left the bank without enough infrastructure staff to actually build out and manage the AWS platforms it is now using.

“When we outsourced IT, our technical people went away with that,” Day said.

“We had no technical staff and then we were going to [re-home] 35 percent of our apps into the cloud all of a sudden.

“There was no one to really manage and develop those platforms internally. Trying to get a lack of technical people internally to rally together to create these outcomes was a real challenge.”

Not wanting to wait to hire infrastructure skills back in and re-skill the remaining internal staff to drive the cloud move, NAB looked to AWS, and specifically to the two-year-old AWS Managed Services or AMS.

Day was clear that AMS isn’t going to be part of NAB’s environment long-term, but that it was necessary to fill the skills gap that IT outsourcing had created.

“AMS is training wheels. It’s going to help us build the platforms in a best practice way and to get up and running.

“As we bring our staff in, as we get our training completed, we’ll get to a point where we know we can operate this environment ourselves, and at that point we’re going to pull back from AMS and run the service internally ourselves, which will give us full control and ownership and the right outsourcing-insourcing balance that we’re comfortable with.”

It’s not clear just how many AWS technical staff are running NAB’s environments under AMS; however, Day said that the bank would need “hundreds of staff” for the job when it is eventually ready to insource it, providing some idea of scale.

As it stands, AMS is integrated directly into NAB’s ServiceNow IT service management console, which scopes and feeds provisioning work off to AMS resources.

“We’ve implemented ServiceNow as our enterprise-wide ITSM and it’s wonderful now because if an application team need a new environment, they go into ServiceNow, into the product catalogue, they select the particular environment they want, and it sends an API [call] across to AWS and AWS build that entire landscape,” Day said.

“Once it’s up and running, if we need to change that environment, again straight into ITSM change management, again an API call [to do that].”

Eventually - and NAB did not say when - the manual part of that provisioning and platform management will fall to internal bank staff.

“Guardrails were programmatically put into the environment,” Day said.

“Our application teams don’t see [the guardrails] unless they exceed one of the limits and breach one of our policies. The rails are otherwise invisible.”

NAB’s decade of IT outsourcing not only left it with problems getting the public cloud project up and running, it also killed innovation at the bank.

Day believed that IT outsourcing had “worked very well” insofar as it achieved what it set out to do.

“It had all the intended consequences - prices were lower, things happened in a more routine way, the outsourcing enforced a lot more documentation and process,” Day said.

“But what it also did - and I think this was an unintended consequence - was it stopped innovation.

“It became very hard to do anything new: it required statements of work, purchase orders, price negotiations with vendors, and it became ... a barrier to people experimenting and trying new things.

“So after 10 years, even though I could look at all of the reports [from outsourcers] every month and everything was green - they meet all their SLAs, they do everything just fine - everyone [internally] was terribly unhappy.

NAB said recently that innovation had returned to the bank as more proof-of-concepts started to spring up on cloud infrastructure and services.