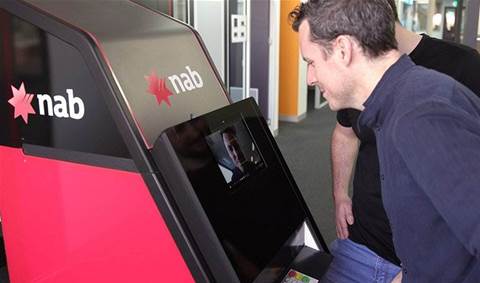 The NAB ATM proof of concept.

Microsoft is starting to muscle in on NAB’s strong alignment to AWS public cloud following the bank’s commitment to pursue a multi-cloud path back in May.

The vendor said today it is now running multiple training courses in NAB’s cloud guild, which was set up in May this year to get bank staff skilled up on AWS cloud.

The expansion of the guild’s focus to Azure follows comments by NAB executive general manager and CIO Yuri Misnik to iTnews earlier this year that the bank would look beyond the AWS ecosystem when it came to public cloud.

“Certification as a Microsoft technology associate on the Microsoft cloud platform, Linux on Azure, and cloud platform and infrastructure are [now] available through the NAB cloud guild,” Microsoft said today.

“Four different levels of cloud computing education are being made available through the NAB cloud guild – from introduction to cloud computing for novices, through to expert level certified competency in all aspects of Microsoft Azure.

Microsoft was keen to portray that breaking out of the AWS ecosystem would be advantageous for the bank.

The vendor said Misnik was “profoundly pragmatic about which cloud takes on which workload” and suggested that multiple providers would allay “technical and commercial risk”.

Microsoft said it is also banking on Misnik’s almost decade-long stint at Microsoft up to 2013 - and his three years at AWS directly following that - to “manage this delicate dance of divvying up workloads”.

“The right competitive tension ensures NAB gets the best deal and most engagement from its vendor partners, and it’s determined to distribute cloud workloads across multiple cloud providers – but where it makes most technical and commercial sense.”

It remains unclear just how big a slice of the NAB infrastructure and application hosting pie that the public cloud operators are jockeying for position on.

NAB is known to be standing up an internal platform based on “open hardware and software” that, together with public cloud, will form its future state infrastructure.

Microsoft was keen to show that its short stint in the cloud guild is already paying dividends.

“A team formed from the NAB cloud guild is now working with Microsoft on [a] proof of concept that uses Azure Cognitive Services to boost security around ATM transactions,” it said.

“The concept was developed in approximately two months by a small agile team from NAB’s in-house innovation lab, NAB Labs, and technology division.”

According to Microsoft, the concept was “designed purely to test the customer experience” of using facial recognition, cloud and other technology when interacting with an ATM.

It was not clear what regulatory hurdles a bank would have to pass to use the technology in the wild, nor the extent to which NAB saw it as a realistic option.

“The proof of concept has NAB customers visit a kiosk which captures their image and links it to their bank card and PIN,” Microsoft said.

“The ATM concept asks the user to enter a PIN, providing a second factor of security along with their facial biometric to confirm their [identity].”

NAB also indicated it is likely to rehost SAP on Azure using the Microsoft cloud product of the same name.