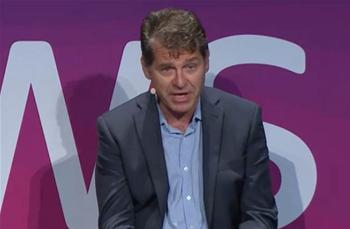 The move occurred with little fanfare considering Day’s senior IT role, which saw him regularly present on the bank’s achievements in its cloud migration.

He also previously held the title of executive general manager of infrastructure, cloud and workplace at the bank.

A NAB spokesperson confirmed Day's exit to iTnews and said his replacement is being sought.

"We can confirm Steve Day has left NAB and we thank him for the significant contribution he made to our technology transformation," the spokesperson said.

"He has taken up a role at another company and we wish him the very best in his next endeavours."

Day - who had previously spent substantial time with both AWS and Telstra in its cloud business - oversaw NAB’s migration to AWS and later Azure, including the automated governance processes that were crucial to receiving regulatory sign-off.

A series of detailed presentations in the early part of the cloud migration, which was largely AWS-focused, detailed NAB’s challenges rebounding from a long period of IT outsourcing, which left it without key skills and resulted in the creation of a cloud guild to retrain staff.

Outside of the cloud migration, Day also presented a range of other projects, including large-scale remote work systems for the pandemic, and the bank's bulging API portfolio.

Day’s LinkedIn profile shows that he left NAB in March and has since taken up a role of vice president of customer success for Asia Pacific and Japan at Databricks, a cloud-based analytics service provider.

The bank has lost several high-profile technology executives over the past year, including chief data officer Glenda Crisp and the founder of the cloud guild Paul Silver.