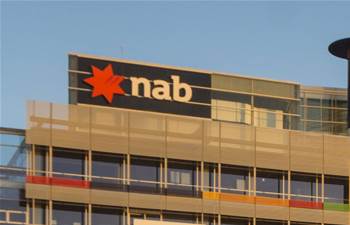 Containerises Deloitte SaaS product to run on its own AWS instance.

NAB ran tens of thousands of outbound call recordings through speech analytics models to check that customers were given appropriate disclosures on loan repayment deferrals during Covid.

While speech analytics was first applied to a Covid-related use case, Crisp said the bank had been evaluating the technology since before Covid, but that the onset of the pandemic brought the work forward.

One of the early challenges was that the bank’s preferred technology, Deloitte’s TrueVoice, ran as software-as-a-service but could not be packaged up and run inside of a customer’s own cloud presence.

Crisp said both she and NAB were uncomfortable at the prospect of shipping large amounts of call recording data to an as-a-service platform.

“I believe that data has gravity, and therefore we really need to bring models to the data,” she said.

“I don’t believe it’s sustainable, at least not for a bank, to be shipping large amounts of data outside the organisation to a model.

“Given the type of data we hold, I’m just generally uncomfortable with sending large amounts of it outside.

“TrueVoice started out as a software-as-a-service offering which would have meant we would have had to ship our data out.

“But we worked really closely with them to essentially create a containerised deployment outside of Deloitte’s environment that runs in our environment on AWS.”

Crisp said that Deloitte had been “outstanding” in effectively shifting the operating model of TrueVoice to cater to NAB.

“The processing engine that they have has proprietary algorithms to convert audio to text and to perform sentiment analysis. They use machine learning algorithms and they apply speech analytics for feature extraction, but this is all now performed securely on our NAB Discovery Cloud (NDC) platform on AWS,” Crisp said.

“By running it in our environment, we also make sure that all of our governance processes, our ethical and privacy frameworks are applied, all of the security controls etc are all applied and it’s running containerised within our space.”

Voice recordings flow from the platform in which they are captured into NAB’s data lake - the NAB data hub or NDH - and to the NDC where the TrueVoice model is applied.

TrueVoice uses an AI engine to transcribe and analyse the content of a customer’s call.

“It takes unstructured data that’s trapped in the recordings, emails, chat transcripts etc and matches it up with structured metadata such as which agent handled the interaction, the time of day it occurred, the length of the call, and who the customer was,” Crisp said.

“Then we undergo a speech recognition process that turns the sound into text.

“This technology really automates a range of operational processes for us, and it includes multiple types of technology, everything from call recording to speech recognition and transcription, searching by keywords, extraction of actionable insights, conversation quality management, behavioural analysis etc.

“There’s a wide range of capabilities that have to be brought together to really do speech analytics well.”

In the past, similar albeit more manual processes would have been applied to a sample of calls; TrueVoice provides NAB with assurance that it has met its compliance obligations across all calls, not just those it had sampled.

Several models have been developed and trained so far, with more in the pipeline.

TrueVoice has so far been deployed in NAB Assist, the part of the bank that deals with hardship calls and cases.

“We implemented this late last year, and the first components of TrueVoice were deployed with more than 60,000 outbound Covid check-in calls,” Crisp said.

“NAB Assist used speech analytics to support compliance monitoring over the conversations with our customers that had paused their home loan repayments during Covid.

“The compliance check was run over what we called the check-in calls, which is at the midpoint of the deferral, and on the expiry calls so just before the deferral ended.

“The purpose of this scenario was to ensure that the appropriate disclosures were being made by our bankers to our customers.

“We also were seeking to understand their sentiment and ensure that the right treatment plan was being applied, so this was not just about compliance but also looking after our customers and making sure they were getting what was needed.”

Using TrueVoice, Crisp said the bank was able to identify some missing deferral disclosures from its outbound calls.

“This then meant we had a shortlist of customers we needed to call and make sure that we had correctly given them that information,” she said.

“Essentially because we identified those customers, they got a higher rating in terms of priority for a return phone call.”

The check-in calls were also passed through a vulnerability model also built on TrueVoice.

“This flagged a couple of hundred customer calls that we thought we should listen to manually because the customer may be experiencing additional distress,” Crisp said.

“Once we listened to those manually, that translated into a few customers that we needed to reach out to and really give them additional support.”

Achieving the same level of compliance assurance using sampling and traditional methods would have taken about seven years to manually execute, Crisp added.

TrueVoice is also anticipated to bring benefits in being able to recognise exemplary instances of customer service and learnings that might be useful for other bankers and agents.

“Where we can see calls that have gone quite well, the compliance has been met and there’s been good [customer] sentiment, then we look to take those learnings and coach others so that they can benefit from it,” Crisp said.

“If we can find, let’s say, a banker that is really good at ticking all of the compliance boxes but they’re also good at the engagement with the customer and the positive sentiment, then we’re going to want to learn from that conversation style and approach and apply it more generally to others so we can both meet compliance and have a good customer experience.”

Crisp said that what the bank had achieved so far with TrueVoice represented a minimum viable product (MVP) phase for the technology.

“We’re finishing out all of our industrialisation [of the technology] this month, and I’ve got a backlog of additional use cases to put through the model, again primarily starting from a compliance quality point of view and uplifting customer experience,” she said.

Crisp also said the bank would run additional training to skill up contact centre staff and data scientists about when and how to take advantage of TrueVoice, reducing the bank’s reliance on external assistance.