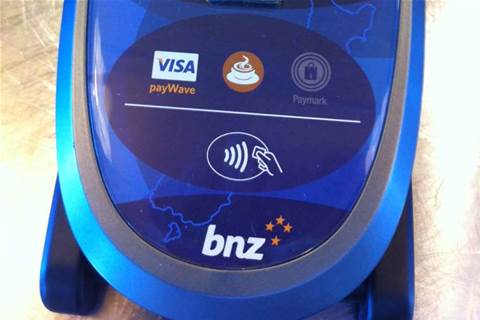 Despite uptick in mobile use.

The major bank this week unveiled statistics indicating more than a million logins to its internet banking site on June 30, the day before the end of the financial year.

The bank recorded nearly 600,000 payments made online worth a total of $2.15 billion, with more than a third of use originating from smartphones and tablets.

A NAB spokeswoman said the statistics indicated "our customers are becoming more and more comfortable transacting via online channels".

But when asked about how the bank would take advantage of an uptrend in mobile payments, the spokeswoman said only that NAB is "closely monitoring the mobile payments landscape" and speaking with potential telco partners, handset manufacturers, and other payment schemes.

"Mobile payments is the next logical step and NAB is actively working towards a future where our customers will be able to use their mobile phone as a wallet," the spokeswoman told iTnews, citing security as a key concern and likely obstacle to any real move on the strategy.

NAB trumpeted an Australian-first trial of mobile payments in 2008 when it launched a three-month trial of contactless payments with Telstra and VISA, using software downloaded to a phone's SIM card for transactions of less than $35.

Despite recording significant satisfaction with the service, the trial never evolved into strategy after the three months.

All four major banks have at times trialled near-field communications technology on smartphones to determine the viability of contactless payments in the Australian market.

"Banks can definitely compete but I don't see banks being first movers in this market," he said at the time.

"Because the need for an integrated service offering, for banks to go to market with a new product or service is very expensive; there's a long lead-time to it, whereas a smaller niche player can go to market with a very thin slice of that banking offering far, far more easily."