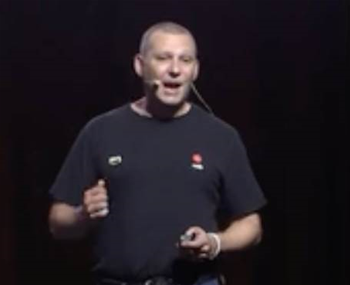 Now has seven percent of all AWS-certified people in A/NZ.

National Australia Bank is now home to seven percent of all AWS-certified people in Australia and New Zealand, second only to AWS itself.

NAB Cloud Guild founder and engineer manager Paul Silver showcased the first year of results from the Guild at a series of AWS events over the past two months, including a financial services event in Hong Kong and the AWS Summit in Singapore.

Silver told the Singapore event mid last month that the bank has now certified 506 people in AWS skills and that it is increasing that number at a rate of about 12 a week.

“We pretty much send in 24 people a week on an education course,” Silver said.

“What we found of those 24 people, 12 people will get certified so we're getting about a 50 percent success rate.”

Silver indicated that one way NAB is increasing its success rate on certifications is by actually watching people book an exam after completing education sessions.

“The reason that people are not actually getting certified is if they don't book the exam,” he said.

“Get them to book the exam directly after finishing the course and then you'll get much better outcomes from it.”

Silver said that “seven percent of all people certified in Australia and New Zealand in AWS [skills] now work at NAB.”

Those comments were more or less mirrored by NAB’s senior automation and DevOps consultant Lupco Trpeski at the Sydney version of AWS Summit last week.

“Currently, we have over 500 AWS-certified engineers, which is second only to AWS themselves,” Trpeski said, before adding - at least partially tongue-in-cheek - “we're hoping to take over from AWS soon.”

Both Trpeski and Silver indicated that NAB is offering cloud education to workers outside of technological domains.

“We haven't limited that to just IT, we've actually put it across the board,” Trpeski said.

“So it doesn't matter if you're a mainframe developer or you're a graphic designer, we actually want everyone to be really competent with the AWS services.”

Silver said it was important that the business understood why NAB was undergoing a transition into the cloud. He said that executives were being targeted with cloud skills training.

Trpeski said that, where possible, the bank was also hiring people with AWS certifications, which is likely to also boost their numbers.

“Where we can we actually try and make sure that when we hire people, they come in with AWS certifications,” he said.

The bank has tried to maintain internal excitement on cloud training by “celebrating success and wins”.

Those that achieve certification are given a joint-branded NAB and AWS black t-shirt.

“We tell everyone just to wear it on a Friday, and people start conversations about 'how do I get one of those t-shirts',” he said.

“The other thing we do is we celebrate anyone who's certified as well. We put them in lights, because it's hard - you've still got your day job and you still got your life at home.

“It is hard, we understand that, so we really want to celebrate those successes.”

“We may not hire them all but they've got a real interest in what NAB's doing. It's been great.

“So from a talent and acquisition perspective, we've really lifted our game by having the Guild.”

Silver said that developer productivity - measured in GitHub repository commits - is higher and that the number of AWS accounts opened for experimentation had also risen since the Guild’s inception.