Myer looks to online, data after biggest ever loss 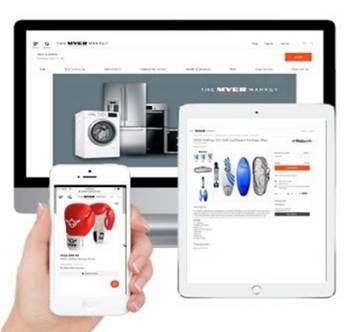 Myer is considering separating out its promising online and loyalty operations into distinct business units after today posting the biggest loss in its history.

The company remains in a state of flux since the Myer board forced out former chief executive Richard Umbers in February following the retailer's third profit downgrade.

Myer late last year admitted the five-year transformation plan it launched in 2015 would need to be reworked.

The company is being led day-to-day by Myer chairman Garry Hounsell while the search for a new CEO continues.

In its first-half results today, Myer revealed total sales had declined by almost 4 percent to $1.7 billion compared to the first half of last year.

It posted a net loss after tax of $476.2 million, the largest in the company's history.

Hounsell said the result was “unsatisfactory and reflected a number of execution issues including, for example, the failure to respond appropriately to the heightened competitive environment prior to Christmas”.

However, the company's online sales grew by almost 49 percent to reach $105.2 million, with the operation now equivalent to sales volumes from the retailer's third largest store.

The retailer today said its "future success could be built around [its] online and loyalty operations". Myer first signalled a greater focus on its data business last November.

Hounsell today flagged the potential to split out the businesses into separate units.

"We are investigating the viability of establishing both online and loyalty as separate business units to give them more prominence as future growth drivers," Hounsell said in a statement.

"I am encouraging the team to explore commercial partnerships to capitalise on their potential and unlock shareholder value."

Since January the Myer One loyalty program and the online operations have been managed by chief operating officer Mark Cripsey, after he was appointed into the new role as part of its drive to omni-channel retailing.

Myer is currently developing an "enhanced" version of its website, it said today.

The company also today announced a "renewed" company-wide focus on product, price and customer service in an effort to boost trading.

Hounsell said this would "re-engage our traditional customer base"; Myer's former strategy under Umbers had targeted "high value" customers.