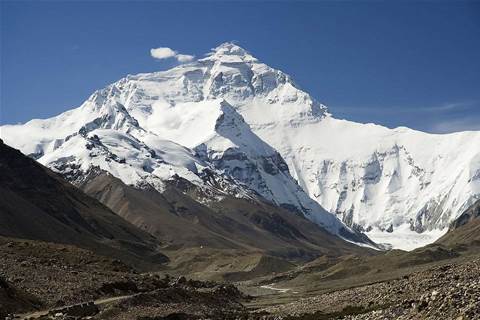 Mobile coverage at the top of the world.

China Mobile has quietly upgraded mobile coverage on Mt Everest to time-division LTE 4G, with the help of its technology partner Huawei.

The service reaches 5,200 metres above sea level and was launched on June 11 this year, with streaming high definition video being transmitted from the Mt Everest base camp.

Mt Everest has had GSM coverage since 2007, also set up by China Mobile and Huawei.

However, the Chinese companies are not the first to provide cellular broadband on Mt Everest. In 2010, NCell, a subsidiary of Sweden's TeliaSonera, deployed a 3G base station also at 5,200 metres on the Nepalese side.

Part of the Himalayan range, Mt Everest straddles the border between Nepal and Tibet, the latter country under Chinese rule after an invasion by the People's Liberation Army under Mao Zhe Dong in 1951.