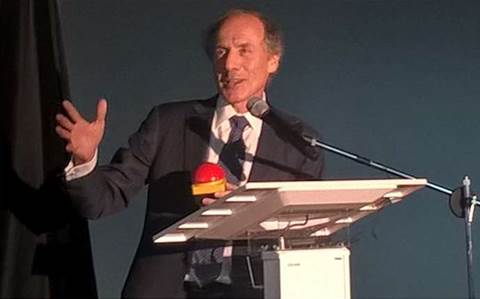 The system features a 1.15 petabyte Lustre parallel file system capable of reading data at 24 gigabytes per second, which is around four times faster than the system used for its older MASSIVE-2 supercomputer.

It is connected to the rest of Monash's research infrastructure through a 100 Gb/s Mellanox spectrum network.

The new supercomputer sits in the data centre at Monash University's main Clayton campus, alongside its university's pre-existing MASSIVE-2 cluster.

The MASSIVE-1 supercomputer is located at the nearby Australian Synchrotron.

"There's a nexus between science and technology. Some think they're separate, but really they enable each other," Finkel said at the launch.

"We need world-class high-performance computing to make the massive breakthroughs."

Monash Unviersity's dean of the medicine faculty Christina Mitchell said the new supercomputer would be used for research into protein expression, genomic data and cellular-level microscopy..

"I heard a very compelling talk from a cancer researcher who argued we should stop doing experiments and start analysing the data we already have, because many of the answers are in the data researchers already have – if only they can make the links," Mitchell said.

"When you think there are 7 billion humans and 30,000 genes, we need to have some way of looking at that data and analysing it.

"Examining the links between gene sequences and human outcomes can help us to identify how to prevent disease... But that data is worthless without analysis, and that's why we're so excited by the MASSIVE project."

"In CSIRO, we choose to develop computer partnerships for very specific reasons. We have more than 5000 staff across more than 50 locations around the country, and many have very specialised computing requirements.

"Partnering makes it easier to achieve critical mass and economies of scale, while also tapping into expertise from across the university system, and by partnering we can also achieve economies of utilisation."

Monash University also today said it had become the first partner of Nvidia's Technology Centre in Singapore, which will see the chip vendor invest in and assist with research involving the supercomputer.

At their launch in March 2012, MASSIVE 1 and 2 each contained 42 Intel servers and 84 Nvidia GPUs, delivering a theoretical peak of 49 TFlops.

Accompanying the three supercomputers is a data visualisation facility called CAVE-2, which the university rolled out two years ago.

The launch of the new Monash supercomputer comes just weeks after Adelaide University unveiled its new supercomputer, dubbed Phoenix, which benchmarked at 300 TFlops at launch.

Andrew Sadauskas attended the launch of MASSIVE-3 as a guest of Nvidia.