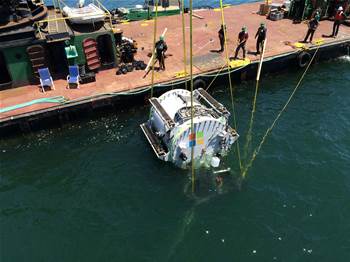 Four months in the sea with Project Natick.

Called Project Natick, Microsoft researchers submerged a data centre in August last year, one kilometre off the coast of California, and operated it for four months.

Two of the key benefits of submersible data centres for customers are rapid deployment in 90 days and low latency, as facilities can be placed closer to users, Microsoft said. The surrounding water provides cooling for the data centre, which Microsoft expects to be powered by renewable energy sources.

Microsoft said it envisions Project Natick in a cloud-based future, deployed in areas that have large bodies of water. Around half of humanity lives close to the sea or lakes, Microsoft said.

There is currently no timeframe for the commercial deployment of Project Natick submersible data centres. Microsoft said it is exploring the feasibility and business acceptability of sunk data centres, and said it was still early days for such facilities.