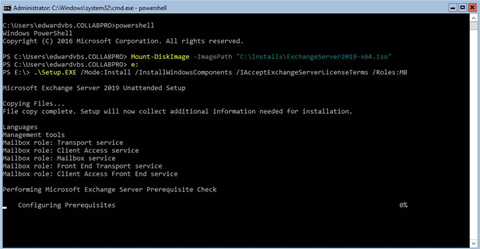 Exchange 2019 being installed on the requisite Windows Server 2019 Core

Microsoft has launched its Exchange Server 2019 communications, contacts and calendaring flagship despite the required Windows Server 2019 still being unavailable, leaving customers unable to test and deploy the software.

Windows Server 2019 version 1809 was pulled from distribution earlier this month along with the desktop Windows 10 equivalent, after users complained that the operating system releases deleted files on their computers.

"We’re aware all media for Windows Server 2019 and Windows Server, version 1809 has been temporarily removed and Microsoft will provide an update when refreshed media is available.

Exchange Server 2019 will be fully compatible with version 1809, and the refreshed version," Microsoft's Exchange Team wrote in a blog post.

As of yet, Microsoft has not provided a release date for the refreshed versions of Windows Server 2019 and Windows 10.

When customers can try it out, Exchange Server 2019 is said to run better on multi-core systems with plenty of memory. Microsoft said the new Exchange can use up to 48 processor cores and 256 gigabytes of RAM.

Database failovers are faster in Exchange Server 2019, using Bing-based search technology and overall, Microsoft promises that the new version of its communications platform can handle more users per server than before.

On the security side, Microsoft has cleaned out old ciphers and hashing algorithms and Exchange Server 2019 will only use the Transport Layer Security 1.2 protocol out of the box, which might restrict support for legacy systems.

This means customers who currently connect third-party switchboard software or Skype for Business Server to Exchange can't continue to do that with Exchange Server 2019.

Instead, Microsoft suggests that customers switch to Skype for Business Server 2019, use Cloud Voicemail, or migrate to the Office 365 equivalent.