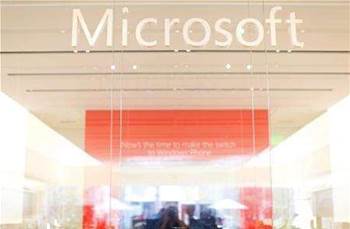 The interior of a Microsoft retail store is seen in San Diego January 18, 2012. Credit: Reuters/Mike Blake

Microsoft's quarterly profit edged lower as Office software sales slowed ahead of a new launch, offsetting a solid but unspectacular start for its Windows 8 operating system and sending the company's shares down 2 percent.

The results mark a stark change from the 1990s, when Microsoft was the unchallenged king of computing and the release of a new Windows operating system would generate excitement and generally boost its stock.

Neither appears to be true now, as Microsoft has so far lost out to Apple and Google in the battle for the mobile computing generation.

Overall sales rose 3 percent to US$21.5 billion, Microsoft said on Thursday, in line with analysts' estimates.

"It's a pause before a product launch, which is typical," said Josh Olson, an analyst at Edward Jones.

With the loss of some deferred revenue to account for discounted upgrades to new software, Office revenue fell about 10 percent to US$5.7 billion, which is not unusual ahead of a new launch, expected in the next few weeks.

Windows sales, which included some deferred revenue from the launch of Windows 8 last October, jumped 24 percent to US$5.9 billion, slightly ahead of analysts' average expectations, which were lowered over the last few months.

Microsoft said it has sold more than 60 million Windows 8 licenses since its late-October launch, an unexceptional start for a product which has not gripped the public's imagination in the way of Apple's iPad. Microsoft did not detail sales of its competing Surface tablet.

"Windows 8 continues to have an uphill battle in convincing investors this is going to be the key to the growth story for Microsoft," said Daniel Ives, an analyst at FBR Capital Markets. "It continues to be a major prove-me product cycle."