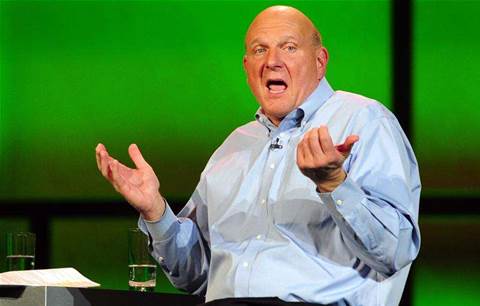 Microsoft ended its third fiscal quarter on a roll, with growth in its cloud and entertainment businesses helping to offset  Windows 8 challenges.

Total revenue jumped 18 per cent for the quarter ended March 31 and reached US$20.5 billion (A$19.9 billion) compared to the same period in 2012, enabling a profit of US$6 billion.

The star performers for the company were its enterprise cloud business, but also the entertainment and devices division that reported a 56 per cent revenue hike to US$2.5 billion (A$2.4 billion), as Xbox Live membership rose to 46 million worldwide.

“The bold bets we made on cloud services are paying off as people increasingly choose Microsoft services including Office 365, Windows Azure, Xbox LIVE, and Skype,” chief executive Steve Ballmer said.

Advertising revenue from search was also a bright spot, rising by 22 per cent in the last quarter. Nevertheless, Microsoft's Online Services Division continues to lose money, albeit substantially less in the last quarter, US$262 million compared to U$480 million (A$272 and A$466 million respectively).

Microsoft's new operating system, Windows 8, appears to have misfired in in the market.

Although the Windows division hiked revenue by 23 per cent compared to the previous quarter, Microsoft said that adjusting for the US$1.66 billion revenue it booked for the Windows Upgrade Offer, earnings for that part of the company were flat.

A further setback for Microsoft was the large 561 million euro (A$710.5 million) fine that it copped from the European Commission this year. Microsoft failed to implement a promised choice of web browser other than Internet Explorer in Windows for European customers and is expected not to challenge the fine, so as to avoid further antagonising the powerful regulator.

As part of the financials announcement, Microsoft said its chief financial officer, Peter Klein, would step down after eleven years at the company. Microsoft did not name Klein's successor, who is expected to come from within company ranks.