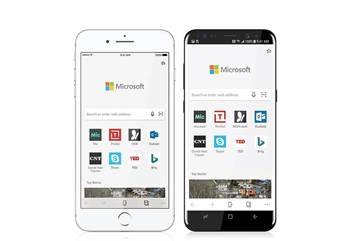 Edge for Android coming up too.

Microsoft is bringing the Edge web browser to Apple iOS and Google Android after the continued decline of its own mobile platform.

Members of Microsoft's Windows Insider early access program can sign up for previews of Edge on the competing vendors' mobile platforms.

The company is first releasing Edge for iOS under Apple's Testflight beta program, meaning it is limited to no more than 10,000 users.

A preview for Google Android users will be available in the coming weeks through the Play Store.

Microsoft will hope that bringing Edge to the world's two leading smartphone ecosystems will increase the browser's lowly market share. According to NetMarketShare, Edge had just over 5 percent share in September, versus almost 60 percent for market leader Google Chrome. Edge's share was scarcely a third of its predecessor, Internet Explorer, which stood at 14 percent.

Edge previewers on iOS and Android will have similar features to those enjoyed by Windows 10 users, including Favourites, Reading View and New Tab Page. Continue On PC will also be available.

However, the underlying browser rendering enging for Edge will be the default WebKit on iOS, and Chromium on Android, and not Microsoft's EdgeHTML.

iPhones running iOS 10.2 or higher are supported in the preview, Microsoft said. Android users need to have a smartphone running version 4.4 "Kitkat" or higher.

iPads and Android tablets are not supported yet, and Microsoft did not say when they would be.

Microsoft has struggled to bring Windows to smartphones and tablets, and has instead ported its software to competing mobile platforms to retain users.

This has included flagship products such as its Office productivity suite, which first appeared on iOS four years ago.