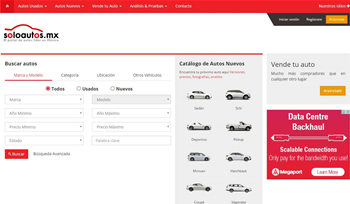 Delivered from its Melbourne HQ.

The multi-year rebuild of Carsales’ core platform around a microservices-based architecture has allowed the company to expand its full retail stack into new markets in Mexico and Chile.

The automotive classifieds site started re-architecting its core website - previously “one monolithic piece of code” - around four years ago in a push for more flexibility and resiliency.

It culminated in the migration of its production environment from a hosted Hostworks facility into Amazon Web Services earlier this year, while flipping its disaster recovery environment the other way around.

With the microservices architecture - written predominantly in .NET with interaction provided by the RabbitMQ open source messaging system - now bedded down, Carsales has for the first time been able to expand its full platform into new markets.

Its core platform has been replicated identically on the back-end into Mexico (with soloautos.mx) and Chile (chileautos.cl, still in beta) within the past few months.

“What we’ve done is make the platform global, where language is a section of our platform rather than something we develop code to,” Carsales chief product and information officer Ajay Bhatia told iTnews.

“The presentation layer is the only thing that requires specific language choices for users, and we have a philosophy here now that when we’re building, language is a user preference,” CTO Jason Blackman added.

The language barrier is one of the biggest headaches for developers building for new markets. Carsales tackled the challenge by spending several weeks translating - using humans rather than software - the troves of text on its Australian website into local versions of Spanish for Mexico and Chile.

What seemed a big task “surprisingly took a lot less time than we thought”, Blackman said, thanks to collaboration between an on-the-ground team of 10 developers in Mexico and some local Spanish language translators.

“We’re actually quite a multicultural group here in Melbourne, there’s quite a few Spanish speakers. The first cut was quite easy, but it was about making sure we used the local resources on the ground in Mexico to proof the entire product before we launched," Blackman said.

The new deployments mark the first time Carsales has provided its full retail stack in a market other than Australia.

While it has presence in other regions overseas, these are on what it calls a “minority investment” basis - where only some of Carsales’ services are provided. This is the case in its operations in Brazil - which uses Carsales' Ryvuss search engine - and South Korea, thanks to the company's 49.9 percent ownership of encar.com.

“We had an international strategy and could have gone down the path of investing in software development specifically in those countries, but the fact that we had the cloud capability and microservices architecture already established here in Australian [meant we were already equipped] to take that globally,” Blackman said.

“The two converged at a similar point in time."