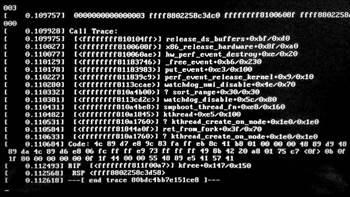 Users of the Ubuntu Linux-based operating system are reporting boot up failures after updating their systems with a kernel patched for the Meltdown and Spectre security vulnerabilities.

Several users reported that after auto-updating their Ubuntu 16.04 systems with the Meltdown/Spectre security fixes, their computers would not boot up.

Some users said no log files were written that could have helped them locate what is causing the problem, but others captured kernel panics with traces being output on their computer screens.

The issue appears to be caused by the Linux kernel version 4.4.0-108 shipped as part of the Ubuntu update process.

Reverting to the earlier kernel 4.4.0-104 without the security updates allowed users' computers start up as normal again.

Kernel version 4.4.0-109 available from the Ubuntu software repositories and which also contains the Meltdown security fix, takes care of the boot up problem.

Patching against the Meltdown and Spectre vulnerabilities, which are due to processor design decisions, have been problematic for software vendors.

Earlier this week, Microsoft had to pull its patch for Meltdown and Spectre for computers with older AMD processors installed, after users reported boot up failures once the update had been applied.