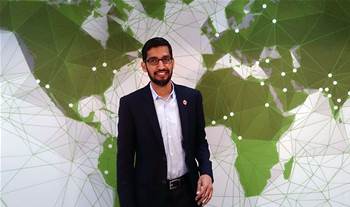 From A to Z: Alphabet's new businesses.

Google founders Larry Page and Sergey Brin just handed the keys to the Google castle to Sundar Pichai, in one of the most significant promotions in the company's history.

Pichai will head up the hugely profitable online giant, which Page and Brin today said would be become the largest subsidiary of their new holding company, Alphabet.

Alphabet will be run by the two founders, and will allow them to ensure a strong focus is kept on main breadwinner Google as they experiment with new technologies and areas of business, like the Wing drone delivery service, driverless cars and biotechnology, among others.

Pichai takes over the reins at Google after spending over a decade at the company, in charge of a wide variety of products and services.

Since then he has slowly worked his way up to become a recognisable face at the company, arguably third in charge behind Google's founders.

He helped launch Google's Chrome in 2008 and later expanded his remit to include the company's applications, such as Gmail and Google Drive.

In 2013, Page and Brin appointed him the head of Android, and later in the year was put in charge of Google's major products like search, maps, infrastructure and ad products - the vast majority of Google's enterprise.

Pichai holds a strong reputation amongst his colleagues and his talents have been recognised by those outside the Googleplex - his name popped up as a possible front runner for the top job at Microsoft when Steve Ballmer announced his resignation last year.

“Sergey and I have been super excited about his progress and dedication to the company,” Page said today.

“And it is clear to us and our board that it is time for Sundar to be CEO of Google. I feel very fortunate to have someone as talented as he is to run the slightly slimmed down Google and this frees up time for me to continue to scale our aspirations.”

While the Google business has been "slightly slimmed down", according to Page, the Google CEO role remains just as important.

Google currently has a market capitalisation of US$444 billion (A$599 billion). It will cease to be traded once the restructure is complete in the fourth quarter of this year, and its shares will automatically convert to the equal amount of holdings in Alphabet.

From A to Z

Google's new Alphabet parent will allow Page and Brin to step away from the day-to-day operations of running Google and focus on more ambitious, big-picture ideas.

"But in the technology industry, where revolutionary ideas drive the next big growth areas, you need to be a bit uncomfortable to stay relevant," Page wrote in a blog announcing the changes."

The new company boasts a collection of products, projects and business for each letter of the alphabet, around 78 in total.

The move is a response to recent concerns from investors that Google's founders were diverting attention away from the company's core web business in favour of experimental projects.

Each business will have its own CEO, but Alphabet will only break out the financial results for Google. The rest of Alphabet will be reported as a whole.

Google will be the largest subsidiary in the group.