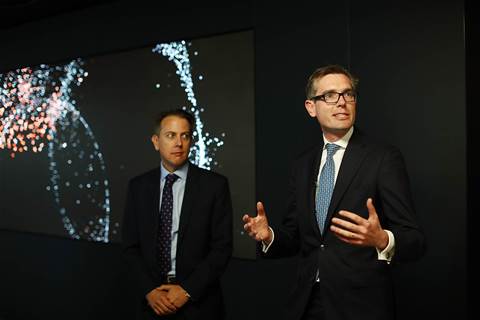 Payments giant Mastercard has moved to shift a significant portion of its research and development work to Sydney, announcing today a new ‘global tech hub’ that will combine development and its corporate and operations in new headquarters in St Leonards.

The launch of the new facility, which already houses more than 600 Mastercard employees, comes as card schemes try to keep up with local bank investments in various fintech ventures that are increasingly being run out of state government supported start-up hubs like Stone and Chalk.

The payments giant is touting the new headquarters as potentially housing up to 1000 staff as it muscles up activities here ahead of the launch of open banking and competition from the New Payments Platform.

Mastercard certainly isn’t sparing the optics either, roping in NSW Treasurer Dominic Perrottet to cut the ribbon on the facility as the government seeks to push its tech job creation credentials ahead of a looming state election.

The payments scheme already has a strong relationship with major agencies including Transport for NSW where the use of everyday payment cards to access public transport instead of Opal Card tickets is already underway.

While the open loop transit trial has been going well in terms of popularity across ferries and light rail, a conspicuous speed bump is that unlike opal card, transit officers still have no way of telling if a payment card has actually been tapped for a payment a the card itself, leaving an enforcement blind spot.

Perrottet deftly navigated around the more technical challenges of that issue at Monday's launch, preferring to dine out on the progress made to date on modernising Sydney's transport system over the previous government's inability to deliver the junked Tcard project for than a decade.

Richard Wormald, division president Australasia for Mastercard is confident open loop payments will be a winner here, pointing to the London experience on which Sydney's Opal system is modeled.

"Transport for London have publicly said they have saved more than £100 million on the implementation, so removing the cost of maintaining the Oyster system, improving debt collection, reducing fraud and so on," Wormald said.

"Given the high usage of contactless payments already in Australia, we'd be very confident that as the solution rolls out across Australia it will be rapidly adopted by travelers across the network."

"I am sure we will see the rollout across the network very shortly," Wormald said.

One business line Mastercard remains evidently keen on in the face of increased competition is corporate payments processing, especially in government where overhauls are now being planned.

NSW Treasury currently has its transactional banking contract out to market, with Mastercard well placed to be in the mix for any NSW payments tech overhaul because of key relationships with both the Commonwealth Bank of Australia and Westpac which are both major issuers of its card products.

While Treasury overhaul wasn't mentioned at the launch, the NSW nonetheless remains keen for the state to benefit from the inflow of tech development investment.

"As Australia's only global city Sydney is the doorway to the rest of the world and this new tech hub is another vote of confidence in the future of NSW," Perrottet said.

“In the next five years we will see more change in payments than we’ve seen in the previous fifty years. Australia is a unique and advanced marketplace making it the perfect bed for testing and innovating with customers,” Wormald said.

“By closing the gap between customers, product and development, businesses of all sizes – enterprises, SMEs or start-ups – are now able to bypass legacy approaches and develop innovation at an accelerated pace.”