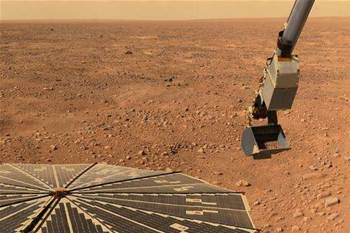 The Nasa Phoenix module, showing its solar panel and one foot.

Nasa has officially called an end to the Phoenix Mars mission, saying it has not heard from the probe for over a week.

The probe has found that water exists on Mars and also proved that a landing on Mars is under rocket power alone, something that could be crucial for planned human exploration there.

"Phoenix not only met the tremendous challenge of landing safely, it accomplished scientific investigations on 149 of its 152 Martian days as a result of dedicated work by a talented team," said Phoenix Project Manager Barry Goldstein at Nasa’s Jet Propulsion Laboratory in Pasadena, Calif.

As the region of Mars where the probe is sited its batteries are no longer receiving enough power to maintain a charge and it is unlikely that it will revive in the spring because of the amount of dust that will contaminate its solar panels.

"Phoenix provided an important step to spur the hope that we can show Mars was once habitable and possibly supported life," said Doug McCuistion, director of the Mars Exploration Program at Nasa Headquarters in Washington.

"Phoenix was supported by orbiting Nasa spacecraft providing communications relay while producing their own fascinating science. With the upcoming launch of the Mars Science Laboratory, the Mars Program never sleeps."
Got a news tip for our journalists? Share it with us anonymously here.
Copyright ©v3.co.uk
Tags:
claimsexplorationhardwaremarsnasaphoenixprobe