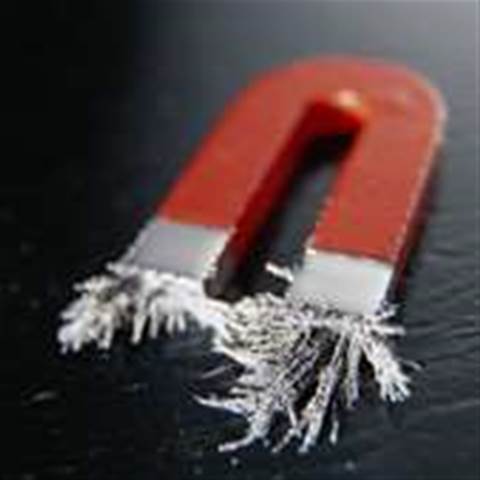 Scientists at the Universities of Bath, Bristol and Leeds have discovered a way to precisely control the pattern of magnetic fields in thin magnetic films, which they believe can be used to boost digital information storage.

The breakthrough has potentially important consequences for the IT industry, according to the researchers, as current technology memory storage has limited scope for development.

They argue that the density with which information can be stored magnetically in hard drives is reaching a natural limit, while silicon chip-based Ram loses information when the power is switched off.

The key advance is the development of ways to use high energy beams of gallium ions to artificially control the direction of the magnetic field in regions of cobalt films just a few atoms thick.

The direction of the field can be used to store information. In this case 'up' or 'down' corresponds to the '1' or '0' that forms the basis of binary information storage in computers.

Furthermore, the physicists have demonstrated that the direction of these magnetic areas can be 'read' by measuring their electrical resistance. This can be done much faster than the system for reading information on current hard drives.

They propose that the magnetic state can be switched from 'up' to 'down' with a short pulse of electrical current, thereby fulfilling all the requirements for a fast magnetic memory cell.

Using the new technology, computers will never lose memory even during a power cut. As soon as the power is restored, the data will reappear.

Professor Simon Bending, of the University of Bath's Department of Physics, said: "The results are important as they suggest a new route for developing high density magnetic memory chips which will not lose information when the power is switched off.

"For the first time data will be written and read very fast using only electrical currents. We are particularly pleased as we were told in the beginning that our approach probably would not work, but we persevered and now it has paid off."

Got a news tip for our journalists? Share it with us anonymously here.
Copyright ©v3.co.uk
Tags:
breakthrough hardware magnetic more pcs powerful promises