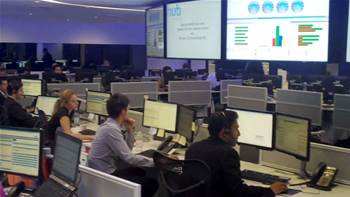 Macquarie Telecom CEO David Tudehope said he had repeatedly been asked whether it would make more sense to outsource call centre functions to the Philippines -- a thinly-veiled reference to AAPT's decision to outsource functions currently housed in its Glebe, Sydney call centre.

"In the telecoms industry, everyone is outsourcing overseas," Tudehope said. "We believe customers will pay for great service."

"It's a refreshing change to see a contact centre not being moved offshore," he said.

"In an industry often dominated by poor customer service, it is fantastic to see an Australian telecommunications provider setting the global standard for the care of its customers."

The decision to build the MacquarieHUB facility came after a tour of ten contact centres in the United States to develop a feel for best practice, Tudehope said. But he found most of the States' biggest and best facilities were a "sad old world", with staff feeling that they were "not in a particularly exciting role."

Macquarie Telecom, he said, has "come to the conclusion" that personality is more important than industry experience when it comes to contact centres.

"We didn't want anyone from the telecoms industry or the call centre industry," he said. "Needless to say we interviewed over 1000 people" for the 40 positions in the centre, he said.

The roles have been framed as "an important stepping stone for careers in IT," he said.

Tudehope made reference to a global customer care award Macquarie won in 2009, and compared his company favourably with the wider standards of the industry.

"Five years ago it was said we were the best of a bad bunch," he said. "Five years later, the TIO statistics show that things are as bad as they were five years ago. There were 200,000 complaints in the last TIO report - think of the people who weren't self-motivated or angry enough to file a complaint."