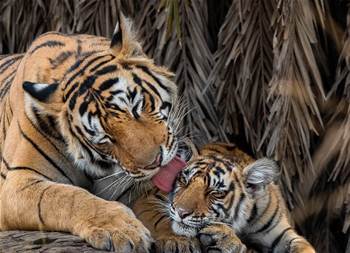 A study at Adelaide Zoo has found a novel way to combine machine vision algorithms with cheap digital cameras to passively check on the health of animals to minimise stress and disruption.

The research from the University of South Australia found that the heart rate and breathing rate of lions, tigers, and pandas could be reliably determined by analysing footage from standard digital video cameras.

Professor Javaan Chahl from the university’s School of Engineering said that the algorithms detect the changing values in the video data as the animals’ chests expand both from breathing - which is more obvious - and a more subtle shift as a result from heartbeats.

“We do some sophisticated signal processing to separate out those two waveforms so we can measure the frequency of them separately,” Chahl said.

He added that using a stationary camera set at a distance means the animals’ health can be continuously monitored without disturbing their daily routines and causing undue stress.

“Some animals basically need to have a general anaesthetic to just have their blood pressure taken or something or to have their heart rate measured,” he said.

“Many other checks would be done during that process, but heart rate, breathing rate are key indicators of health. Up until now, the only way to do that has been basically after being anaesthetised.”

In a paper recently published in the journal Sensors, the researchers explained that digital cameras were ideal for study over other technologies like thermal imaging because they’re both relatively cheaper due to market pressures and capable of capturing higher resolution images, in part thanks to the wider array of lenses commercially available.

Chahl added that the study was a good proof of concept for how the technology could be applied in zoo settings to extract cardiopulmonary signals from the animals, but further refining and validation is needed.

“The next step is probably longer range. These are zoo animals in small enclosures, it would be nice to be able to do this across very long ranges and Adelaide is blessed with one zoo with two sites.

“One is at Monarto, it’s an open range zoo. So we’ll be taking this technology and applying it to video from the Monarto zoo from over hundreds of metres.

“And the step beyond that is to be able to monitor the heart rate and breathing rate of endangered populations of animals in the wild.”