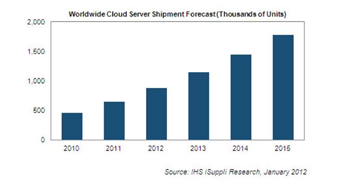 Cheap and dense, but you need scale to buy.

Personal computer sales face a turbulent 2012, but the outlook for servers for cloud computing is quite the opposite.

The numbers are still relatively small, but analyst firm IHS iSuppli has forecast that manufacturers will ship 875,000 low-cost, high-density blade servers this year, up 35 percent from the 647,000 units shipped in 2011.

“Increasingly, clients appear unable to get their ideal configuration of product from current server OEMs, tending instead to go for customised models sourced directly from server ODMs—usually from Taiwanese-based companies like Quanta and Wistron,” writes iSuppli analyst, Peter Lin.

Direct deals between ODMs and clients currently fall outside the scope of IDC and Gartner figures, but they are becoming more important.

While most 'enterprise' organisations can't buy from ODMs because software vendors like Microsoft and VMWare do not support their hardware, others that rely on internally developed applications such as trading firms, oil rigs, and big government labs are increasingly being approached by ODMs directly, Facebook’s former vice president of technical operations, Jonathan Heiliger told Wired recently.