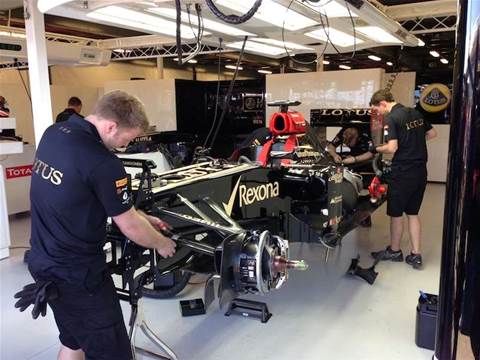 Partnership could extend to Windows Phone.

Members of the Lotus Formula 1 racing team could soon be sporting Windows phones, following the extension of a major sponsorship partnership to 2016.

Lotus signed on to deploy Microsoft Dynamics AX last year, for a business transformation project that saw it line Microsoft up against 12 other vendors offering enterprise resource planning (ERP) systems.

The first phase of the project, which included travel, finance and HR, was deployed in August and finalised in November.

The second phase, covering production and manufacturing, is expected to be completed by May, and the final phase will see Dynamics deployed for racing activities and marketing and sales by 2014.

Francois Puentes, senior marketing account manager with Lotus F1 Team said reporting on efficiency would be a key benefit of the system once fully rolled out.

“Each year we have a budget cap, and if we go over it then the budget over is taken from next year’s budget.”

Prior to undertaking the business transformation project, Puentes said the team was running 11 different applications to analyse various aspects of its business.

“The applications had increased incrementally over the years, so there was no consistency in how we developed them,” Puentes said.

Microsoft Dynamics will eventually manage every aspect of the Lotus F1 Team manufacturing facility from procurement to scheduling to planning.

You have to look closely to find the Microsoft Dynamics logo on each of the Lotus F1 Team cars, but Puentes argued Lotus gives Microsoft “the most compelling business case in the world”.

“We give them visibility, they give us technology.”

Microsoft would not disclose specific financial details of the partnership, however a key part of it appears to be the ability for Lotus to help Microsoft fine-tune the Dynamics product.

“We’re extremely pushy…we’re not very nice customers,” said Puentes. The racing calendar means the team must move 90 people and 40 tonnes of gear to each race with as little as one week turnaround time.

During each race, the team collects 15 megabytes of data per lap from the more than 100 sensors on each car to allow the team to assess how the car will perform on any given track around the world.

The data is analysed by a supercomputer based in Enstone in the UK that has a storage capacity of 360 terabytes.

Microsoft Dynamics general manager Christian Perderson said the partnership meant Microsoft Dynamics could have a permanent showcase of its technology at Enstone, and work closely with the Lotus team to enhance it.

“The relationship enables us to constantly optimise the value, flexibility and simplicity of our enterprise offerings through the direct and ongoing collaboration with our R&D team,” Perderson said.

Puentes said the Lotus F1 team would be happy to see the partnership include Windows phones.

“We look forward to several other Microsoft technologies such as Windows 8, Windows Phone and more being ignited,” Perderson said.

Charis Palmer attended the Australian Grand Prix as a guest of Microsoft Dynamics.