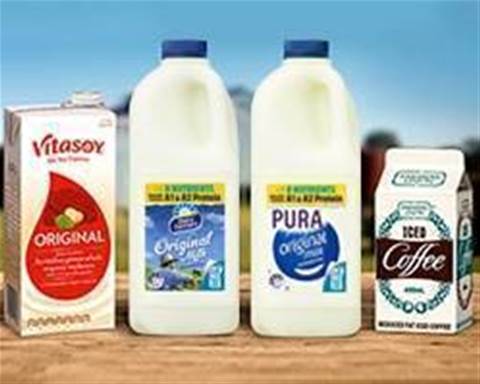 The food and beverage company revealed the project at an AWS executive summit in Sydney in May.

It has previously disclosed its interest in supply chain sensing using SAP products, but the nature of those use cases had been tightly-kept

Chief information officer Grainne Kearns revealed plans to monitor spoilage “across a pool of 400 farms” that support Lion, though she noted the technology could be offered to as many as 5000 farms in Australia, whether Lion worked with them or not.

Lion is also hoping to augment this first IoT use case with others, focusing on improvements both for farmers and for the company’s supply chain.

“In our dairy business, our raw product is milk,” Kearns said.

“We had an issue for our farmers in that they were suffering milk spoilage.

“We went and listened to our farmers, found out that this was a problem for them, and wanted to see if there was something that we could use from a technology perspective that would make that problem go away for them and improve the quality of the product for us.”

A hackathon is born

Lion partnered with Accenture to create the first of what has turned into a series of hackathons to generate ideas and solutions to various problems, in this case milk spoilage.

Through the hackathon process, the company was able to create a prototype IoT solution within 36 hours.

“We sat in a room in the morning, we understood what the problem was, we came up with a variety of solutions, we picked the solution we were going to roll with, and then we started moving,” Kearns said.

“By lunchtime the following day, we had a workable prototype that we were demonstrating.”

Harshu Deshpande, managing director of Accenture Liquid Studio, said that potential solutions were viewed through a “lens of what we call the desirability, feasibility and viability matrix”.

“We’re looking at a solution that's technically feasible, and in a lot of hackathons and prototypes, that's what you end up focusing on,” he said.

“But we also wanted to focus on whether this is desirable for the actual business, or for the end customer, and getting that feedback from the farmers.”

Deshpande said the business case for IoT to address milk spoilage was built up “week-on-week” as the company better understood the problem and tried different ways to address it.

He also said that solutions were designed to keep costs to a minimum.

“We didn't want to go to a proprietary solution. We wanted to leverage the ecosystem.”

One of the problems with applying IoT to milk vats was the physical location of the vats, as well as their age.

“These milk vats are in the middle of nowhere, well away from any critical infrastructure,” he said.

“There were a whole bunch of challenges that we faced around things like network connectivity.”

Lion and Accenture trialled a range of food-grade sensors but found they “somehow need to be pushed into the milk vats, which are completely sealed.”

“We were looking at solutions where we were drilling holes in the top of the vats,” Deshpande said.

“There's still a few vats at a couple of farms where there's still a big hole in the top, where we're now working out how to do a 3D-printed plug [to put] on top.

“There’s lots of interesting examples of sensors we tried, and every week the sensor solution evolved.”

Where Lion and Accenture landed, however, was to use what farms already had.

“We landed on a solution where we actually used existing temperature data from an analogue temperature sensor that was already on the milk vat, plugged the current out of that, and actually pumped it back into an Arduino and a Pycom board that then sent the data back to the cloud,” Deshpande said.

“Everyone talks about smart manufacturing and IoT, but the challenge is that you need to be able to do some of these solutions within existing boundaries and existing challenges, and that was a big learning [for us].”

Transmitting data from the vats is done via Telstra’s IoT-oriented Cat M1 network. “That gave us a good balance between network coverage as well as cost,” Deshpande said.

A farm hub for expansion

Deshpande said Lion and Accenture created “almost a farm hub that could be expanded” in future.

“The idea behind the solution was yes, we're going to use this right now to measure things like the temperature or the volume of the milk vat, but you could quite easily expand the same solution out and apply it to other parts of Lion's business,” Deshpande said.

“We wanted to use kit that we could then modularise or expand as the use cases expanded.”

Data from the vats is fed into both AWS as well as Lion’s core SAP system via SAP’s Leonardo IoT technology.

The company plans to apply advanced analytics to the data held in AWS in future phases.

“We actually wanted to do things like AI and machine learning as a phase two to do things like route tracking, so can you automatically have trucks being sent out to a milk vat that might have failed overnight, or where the temperature has dropped, so that you're reducing the cases or incidents of milk spoilage,” Deshpande said.

On the SAP side, bringing temperature (and other) data from across the 400 farms that Lion sources milk from gave the business visibility over problems that might develop out in the supply chain.

“The fact that we linked back into the SAP systems and were producing dashboards gave what we were doing a greater sense of gravitas from a business perspective,” Kearns said, noting it enabled the presentation of “a consolidated view across different farms back to the business”.

Another benefit of drawing the data back into SAP was that Lion and Accenture could create an SAP Fiori app that could send real-time alerts to farmers.

“The farmers are seeing a view of the data of just their farm, while Lion would see the data of all the other farms that the solution would be deployed to,” Deshpande said.

Deshpande noted that without the Lion and Accenture-created solution, farmers would not be alerted to temperature fluctuations or cooling failures associated with milk vats.

“That ability to give them visibility in real time on a mobile phone app was revolutionary for them. It made a huge difference to their lives around how they were being presented with that data.

“So what that really showed us was the ability for us to not only help Lion in terms of the way that it's doing the pickups of the milk, we were getting a net benefit back to the farmer as well.”

Kearns said that the system is already “saving hundreds of thousands of dollars a year associated with milk spoilage.” It costs about $700 to install and $500 a year to run.